Belarus protests: Minsk still in revolt after week of fear, pride and hope 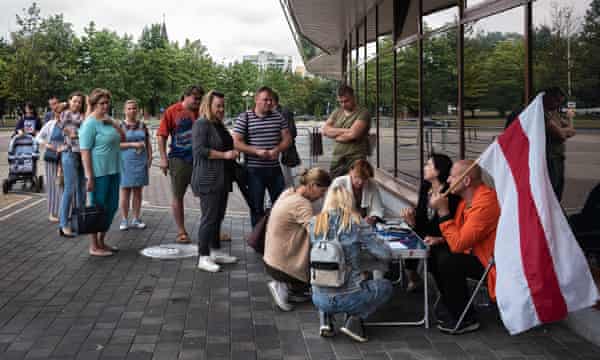 During this week, we have lived many lives,” Maria Kolesnikova, one of the leaders of the Belarusian opposition, said in a video address to supporters on Friday. “For a week, Belarusians have been on an emotional seesaw: pain, fear, rising spirits, apathy, pride, helplessness, hope and happiness.”

Life in Belarus has indeed been an emotionally exhausting experience in recent days, as rapid swings in momentum seemingly change the atmosphere overnight. Peaks of adrenaline, when the 26-year regime of Alexander Lukashenko seems to be tottering on the edge of the precipice, quickly give way to troughs of despair. And then the cycle begins again.

As the week comes to a close, Minsk still feels like a capital city in revolt, with gatherings of flower-waving women standing defiantly at intersections and the honking of horns by motorists providing a constant aural accompaniment. But there is also a sense of foreboding. Prosecutors questioned opposition leaders on Friday, factory strike leaders have been arrested or interrogated and a recording was leaked of the defence minister telling his generals they should be ready for possible civil war.

After protests against his implausible 80% election win were put down with shocking violence earlier this month, Lukashenko has lost the trust of huge swathes of his population. But the signs are that he retains control of the army, KGB and riot police, whose balaclava-clad foot soldiers have again become visible on the streets of Minsk in recent days.

Lukashenko said on Friday that the issues of the protests would be “solved” in the coming days, and those readying for more big rallies this weekend were anxiously anticipating a possible crackdown.

It was a dramatic change of tone from the beginning of the week, when much of the country was still experiencing a collective high from a vast, cathartic protest on Sunday. The next morning, Lukashenko was heckled during an address to workers at one of the huge Soviet-built factories that still make up a large part of the country’s economy and have long been seen as part of his core support base.

“You’ve always supported the president,” he said, a question that was meant rhetorically but was instead met with loud cries of “No!”. Several times during his speech he was interrupted by shouts of “Resign!”. He stood, fiddling with his jacket and clearly shocked by the reception, waiting for the chants to stop.

Before long, footage of the encounter was being shared via the Telegram messaging app. In shops, on the metro and in small towns across the country, Belarusians scrolled through the videos and watched their leader losing his legitimacy before their eyes.

But Lukashenko, having survived for 26 years, was not about to leave without a fight. As the week went on, he regained composure, summoning his security council and making ominous statements about “restoring order”. He gave awards to nearly 300 officers from the riot police and KGB for their “impeccable service” during the crackdown.

It is now clear that he intends to fight to the bitter end. When President Viktor Yanukovych fled neighbouring Ukraine during the Maidan revolution in 2014, his main concern appeared to be escaping with his life and his cash. Lukashenko is a very different beast: when he told workers that he would rather die than allow new elections, there was no suggestion that his words were merely a rhetorical flourish.

The factory strikes that had threatened to bring the country’s economy to a halt have also lost momentum. At the vast Minsk Tractor Works, Sergei Dylevsky, the head of the strike committee, said that even though he believed 90% of workers supported the calls for new elections, only about 250 out of 15,000 were “ready to go until the end” and potentially lose their jobs, as management cracked down and threatened to punish dissent with dismissal.

Outside the factory on Tuesday, several hundred protesters gathered to chant their support for workers and urge them to strike. They thrust leaflets with contacts and information into Dylevsky’s hands, offered legal advice, or shrieked their support.

A weary Dylevsky shouted amid the melee: “Guys! Yesterday I walked through seven workshops, with about 300 people in each one, and I managed to collect a total of 50 signatures. People are scared.”

Later in the week, Dylevsky became one of seven leaders of a coordination council, set up to facilitate a transition of power, which also includes opposition leaders and the Nobel laureate Svetlana Alexievich. Lukashenko quickly dismissed the body as an attempt to “seize power” and prosecutors have opened a criminal case against it. More informally, strike leaders and other vocal citizens have reported pressure and intimidation from the KGB.

Lukashenko is now holding on to power by force alone, and not only in Minsk. In Molodechno, a city of 100,000 an hour’s drive from Minsk, 251 people were detained in the aftermath of the election, some of them ending up in hospital.

As a result, nearly 10,000 came out for the protest last Sunday, an unthinkable number in a place where protest mood had rarely come to the surface before. Even some former supporters of Lukashenko say they have had enough.

“If he had left 10 years ago he would go down as a hero, but he has started to treat the people as though they are trash. Now I just can’t bear to see him talking,” said one 72-year-old woman, who did not want to be named. Her grandson had signed her up to the Telegram app and she now spent several hours each evening scrolling through news and videos about the day. “All my friends are on Telegram now, and they are all against Lukashenko except one,” she said.

Valery Savitsky, one of Molodechno’s protest leaders, said the atmosphere had changed over the week as local authorities regained confidence that Lukashenko would survive. “Now everyone is a bit scared. It’s clear that we won’t go back to living in the same country we lived in before, but which way things will go – nobody knows,” he said.

As another weekend approaches, the country is braced for more dramatic swings in momentum, with many factors remaining uncertain. How harshly is Lukashenko preparing to crack down? Will a portion of the protest movement, so far almost entirely peaceful, turn violent? Will Russia’s Vladimir Putin intervene?

On Friday, the exiled opposition leader, Svetlana Tikhanovskaya, gave a first press conference since being forced to flee to Lithuania after the election, and said Belarus “would never accept” Lukashenko’s continued leadership. Tikhanovskaya has been backed by European leaders, but Lukashenko rubbished efforts at dialogue on Friday during a carefully choreographed visit to a poultry factory. He also complained that European leaders including France’s Emmanuel Macron were interfering.

“Macron says he wants to mediate in negotiations in Belarus. Let me come to France first and mediate between gilets jaunes and Macron?” Lukashenko said.

In Minsk, Pavel Latushko, a former culture minister who has become one of the leaders of the opposition’s coordination council, said he still hoped there could be dialogue with Lukashenko’s government. His own experiences seem to suggest that is unlikely: in the past few days Latushko has been threatened, strongly advised to leave the country and had his house daubed with paint. However, he continues to believe that peaceful protest and solidarity will bring down the regime.

He said: “We know it won’t finish immediately and we know we have a journey ahead of us. But it won’t be a long journey. People won’t agree to live in the old way again. Even if they manage to extinguish the protest today, then tomorrow it will re-emerge with even greater force.”