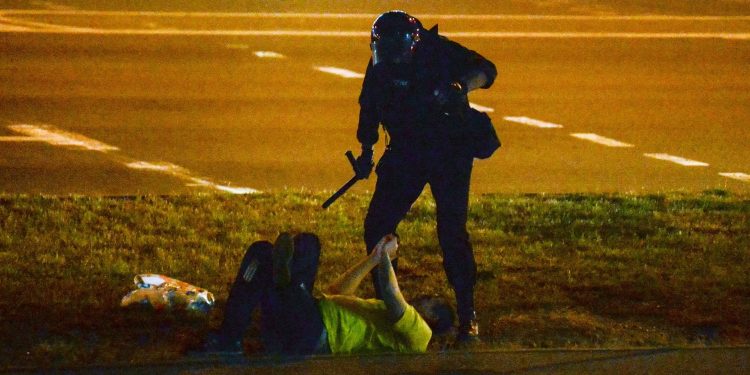 Protesters have clashed with riot police for the third night running in cities across Belarus as the European Union threatened to reimpose sanctions over suspected vote-rigging and a violent crackdown on demonstrators.

After Svetlana Tikhanovskaya, the main challenger to the long-time president said she had fled the country, security forces fired rubber bullets and stun grenades to disperse thousands of protesters in the capital, Minsk.

The heavy police presence failed to deter the protesters, who have taken to the streets accusing Alexander Lukashenko of fixing the outcome of Sunday’s election.

In footage shared on social media, security forces were seen apparently smashing car windows and dragging people out of vehicles to attack them.

Car horns blared in solidarity with the opposition, and people marched, clapped and shouted “go away”. Protesters said Tikhanovskaya’s departure would not stop their movement. “Our goal is to overthrow the Lukashenko regime,” Yakov, a 51-year-old engineer, told AFP in Minsk.

Tikhanovskaya, the wife of a jailed blogger who won mass support in her bid against Lukashenko, appeared in a video on Tuesday morning to say she had left the country for neighbouring Lithuania for the sake her children’s safety.

“You know, I thought that this whole campaign had really toughened me up and given me so much strength that I could handle anything,” she said in an emotional video. “But, probably, I’m still the weak woman I was in the first place. I have made a very difficult decision for myself,” she said, adding that the political unrest was not worth anyone losing their life for.

“Children are the main thing in life,” said Tikhanouskaya, who only ran for office because her husband, Syarhei, was imprisoned for his anti-government activism.

Belarusian state media released a second video in which Tikhanovskaya urged supporters not to protest. Her allies said it was recorded under duress.

Linas Linkevicius, foreign minister of Lithuania, said she was now safe in his country.

The EU condemned the outcome of Sunday’s election, which was officially declared a landslide for Lukashenko with 80% of the vote. Tikhanovskaya, 37, came second with 10% despite having staged huge campaign rallies that observers said represented the biggest show of defiance ever seen during Lukashneko’s 26-year rule.

Brussels said the election had been “neither free nor fair” and warned it could punish those responsible for “violence, unjustified arrests, and falsification of election results”.

It also accused Lukashenko’s government of “disproportionate and unacceptable violence” towards protesters and said it was reviewing its relations with Minsk.

The Belarus government said on Tuesday that more than 2,000 people were detained across the country for taking part in unsanctioned protests on Monday night and into the early hours of Tuesday. It added that 21 police officers were injured in clashes with protesters, and five of them were hospitalised.

The previous day, the government reported more than 3,000 detentions and said 89 people were injured, including 39 law enforcement officers.

The first fatality was confirmed on Monday when police said a man died after an explosive device went off in his hand. On Tuesday, people laying flowers and white ribbon at the spot in Minsk where he died were allegedly targeted by riot police.

“You can shut Tikhanovskaya up, but you won’t be able to intimidate and shut an entire nation up. We continue peaceful protests and don’t recognise Lukashenko as president,” said 24-year-old protester Denis Kruglyakov.

The internet remained blocked for the third successive day in what appeared to be an attempt by the authorities to make it harder for protesters to coordinate their efforts and for people to find out what happened to their missing relatives. “We are still waiting for any sign or information,” said Lena Radomanova, who has been searching for a friend who has disappeared.

The White House said it was “deeply concerned” by the violence. Poland offered to act as a mediator between Lukashenko and the opposition and called for an emergency EU summit.

Lukashenko has vowed not to allow Belarus to be “torn apart” and dismissed the protesters as pawns of foreign powers.

The Belarusian foreign ministry on Tuesday said it had “irrefutable” evidence of “interference from abroad.”