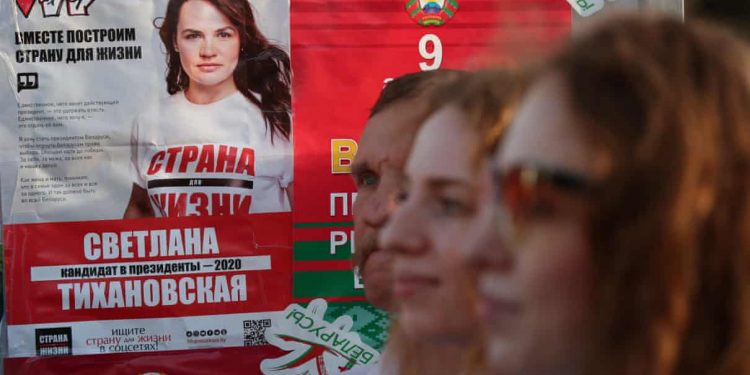 Belarus’s opposition candidate for president was forced to go into hiding the night before challenging the country’s longtime leader, Alexander Lukashenko, on Sunday in the country’s most dynamic election in a generation.

Candidate Svetlana Tikhanovskaya left her apartment after police detained two senior staffers and seven other campaign members in what they called an attempt to scare the opposition before the crucial vote. She was expected to re-emerge to vote on Sunday with an entourage of campaign staffers and journalists.

Polls opened on Sunday after an unprecedented campaign that has seen the country’s largest opposition political rallies since the fall of the Soviet Union. Lukashenko, who has consolidated immense power over 26 years of rule, is expected to claim victory, but anger over vote rigging is likely to trigger protests.

In a final appeal before the vote, Tikhanovskaya condemned security services for arresting peaceful demonstrators and called on troops deployed across the city “not to carry out criminal orders”.

“We need changes,” she said in a YouTube video filmed in front of a bay of shuttered windows. “We need a new president.”

Squares near government buildings have been cordoned off and armed troops have appeared at highway entrances to Minsk. Lukashenko, who was subjected to sanctions by the US and the EU for the government’s heavy-handed crackdown on the opposition after elections in 2010, has warned that illegal protests will be met with force.

At Minsk’s Belarusian State Economic University, voters streamed into two polling stations on Sunday morning from the capital’s unusually quiet streets. Viktor Chonovoy, a vote monitor for the organisation Honest People, was perched on a red plastic chair peering through a window at the ballot box and tallying turnout.

“Nobody is letting me monitor [the vote],” he said. “It is just pro-government monitors replacing one another.” He said that the early voting results showing 642 ballots cast was more than double the actual number of voters, indicating ballot stuffing.

Pro-Tikhanovskaya voters said they wanted to see change, a popular slogan for the campaign, or thought that Lukashenko had overstayed his time in office. Many were pessimistic about the chances of the vote being counted fairly.

“I want a new government but that’s not going to happen,” said Vadim, a pensioner, who wore a white ribbon on his arm and said he was voting for Tikhanovskaya. “If Lukashenko loses power, then it’s obvious where he will end up.”

Valentina said: “I’m going to vote not for Lukashenko, not because I consider him a bad president, he’s done much good for the country, but I think that two presidential terms of five years is enough.” Lukashenko is seeking a sixth term in office. “He’s sat for long enough.”

Supporters of the government said they wanted to preserve stability under Lukashenko’s strong leadership or were concerned with preserving government benefits.

There were already signs of a crackdown heading into the vote. On Saturday evening, riot police in balaclavas made arrests to break up impromptu demonstrations against Lukashenko. Pro-Lukashenko adverts on state television showed chaotic scenes of “colour revolutions” from other post-Soviet states. Belarusian media have warned of a possible internet shutoff to stifle protests following Sunday’s vote, and local activists said that VPNs and an online platform used by vote monitors were knocked offline in the morning.

Tikhanovskaya’s press secretary Anna Krasulina said in an interview that the candidate would travel with staffers and journalists throughout the day. “We can’t defend ourselves physically against armed people or the security services,” she said. “This is the most trustworthy defence we have.”

Lukashenko is facing unprecedented anger over his handling of the economy and a bungled coronavirus response. Before the elections he has jailed opposition candidates and targeted foreign allies, accusing Moscow of sending mercenaries to destabilise the country.

Tikhanovskaya was initially a stand-in candidate for her husband, a popular YouTuber jailed in spring by the authorities. She has grown into an effective campaigner, attracting more than 63,000 people to a campaign rally last month in Minsk, and thousands more in small cities and towns usually dominated by Lukashenko. She has been joined onstage by two other female politicians in a “trio” that has transformed the image of the country’s male-dominated politics.

More than 40% of Belarusians were reported to have already cast ballots in early voting, an unprecedented number that critics say indicate ballot stuffing by the government. Vote monitors contacted by the Guardian said they had been blocked from polling stations in favour of loyalists who were unlikely to raise challenges. A photograph showing a vote monitor standing on a stool peering through a polling station window with a pair of binoculars went viral.

One monitor, Anastasia Kadomskaya, 30, said she had managed to count turnout at her Minsk polling station by sitting in front of an open door in view of the ballot box. She said that her polling station’s official turnout matched her own tally of around 17%, less than half of the national average. “You feel colossal pressure and stress at every moment because you have to keep defending your right to watch the vote as a citizen and observer,” she said in an interview.

The opposition has said it will challenge vote rigging at polling stations but has stopped short of calling supporters out on to the streets. “We’re not calling people to a maidan,” Tikhanovskaya told Belarusian news site Tut.by in an interview published on Friday, referring to the 2014 revolution in Ukraine. “We want honest elections. Is that a crime?”