by BrusselsMorning
in Europe, World 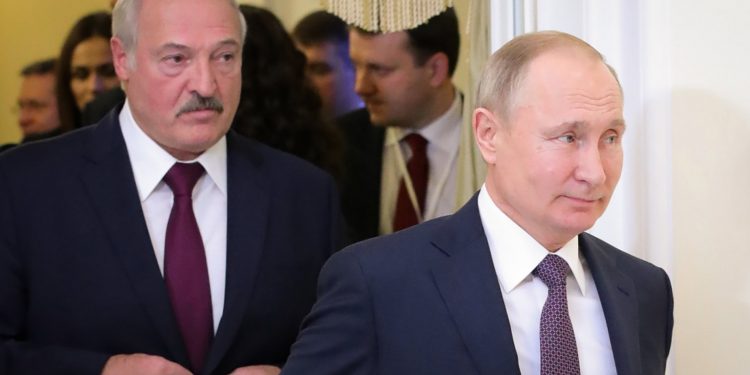 The Belarusian president, Alexander Lukashenko, issued an appeal to his long-term ally Russia as he faced growing pressure to step down following a disputed election that has triggered protests at home and condemnation abroad.

Lukashenko is grappling with the biggest challenge to his 26-year rule as tens of thousands of people have taken to the streets accusing him of rigging last Sunday’s presidential election, and calling for him to step down.

He suggested the impact of the protests might spill beyond Belarus’s borders. “There is a need to contact Putin so that I can talk to him now, because it is not a threat to just Belarus any more,” said Lukashenko, according to the state news agency Belta.

He said: “Defending Belarus today is no less than defending our entire space, the union state… Those who roam the streets, most of them do not understand this.”

The Russian news agency Interfax, citing Belarusian media,said Lukashenko had discussed the situation with Putin in a telephone call.

The European Union is gearing up to impose new sanctions on Belarus in response to a bloody crackdown in which at least two protesters have been killed and thousands detained, while the leaders of Estonia, Latvia and Lithuania called on Belarus to conduct new “free and fair” elections.

The opposition’s presidential candidate, Svetlana Tikhanovskaya, who fled to neighbouring Lithuania on Tuesday, has called for more protests and an election recount.

Several thousand people gathered in Minsk on Saturday. A large crowd formed near the Pushkinskaya metro station in the capital, in honour of a protester who died there during police crackdowns on demonstrators.

Protesters laid flowers at the site where Alexander Taraikovsky, 34, died on Monday during clashes between demonstrators and police a day after the election that Lukashenko claims to have won with 80% of the vote.

Many chanted “Leave!” and some held pictures of protesters with severe bruises, after accounts emerged of detained demonstrators being beaten and tortured. Others carried signs reading “No to violence” and “No more torture”.

More than 6,700 people were arrested in the crackdown and hundreds injured.

Officials have confirmed two deaths in the unrest, including Taraikovsky, who they say died when an explosive device went off in his hand during a protest, and another man who died in custody after being arrested in the south-east city of Gomel.

Taraikovsky’s funeral was being held on Saturday and a “March for freedom” is planned in central Minsk on Sunday, after Tikhanovskaya called for a weekend of new demonstrations.

Russia sees Belarus as a strategic buffer against Nato and the EU, but ties between the two countries had been under strain before the election. Moscow scaled back financial support to Minsk and Lukashenko rejected Russian calls for closer political and economic union.

Lukashenko has accused the protesters of being in league with foreign backers and warned Belarusians to stay at home to avoid becoming “cannon fodder”.

Moscow this week also accused unnamed countries of “outside meddling” in Belarus. Russia has been wary of unrest on its borders since governments fell in Georgia’s 2003 rose revolution, Ukraine’s 2003-04 orange revolution and Kyiv’s 2014 Maidan protests – events in which it says the west backed the protesters.