Belarus prepares for biggest protest yet after week of anger 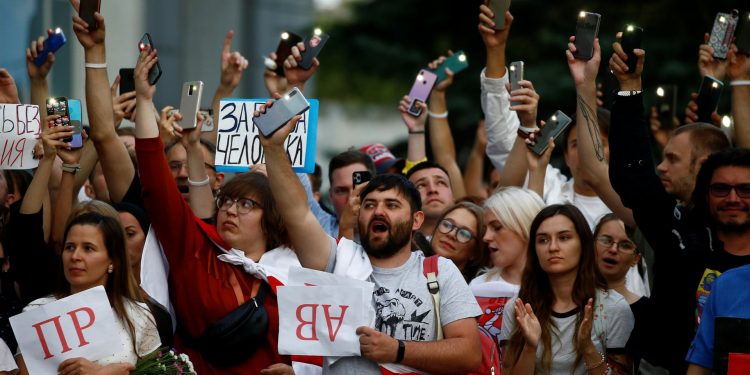 Belarusians are preparing for what could be the biggest protest in the country’s history on Sunday afternoon, as an extraordinary week of rising protest sentiment comes to a close.

Just seven days after authoritarian ruler, Alexander Lukashenko, claimed to have secured 80% of the vote in a presidential ballot, his legitimacy is in tatters and his regime is facing its biggest crisis since he first came to power 26 years ago. The protest mood was stoked further by egregious police violence against thousands of protesters early in the week.

The protest, set for 2pm local time on Minsk’s Independence Avenue, comes a day after Lukashenko claimed to his military chiefs that the Russian president, Vladimir Putin, had offered “comprehensive help” to “ensure the security of Belarus”.

Earlier on Saturday, Lukashenko appealed to Putin’s visceral fear of revolution at home and suggested that if his regime fell, the Russian president was also in danger. “This is a threat not just to Belarus … if Belarusians do not hold out, the wave will head over there too,” he said in televised remarks to a meeting of advisers on Saturday, claiming that the protests were organised by shadowy figures from abroad.

“Both sides expressed confidence that all the problems that have arisen will be resolved soon,” said a Kremlin transcript of the phone call between the two men.

Russia and Belarus are technically part of a “union state”, but Lukashenko has resisted closer integration in recent years and proved a tricky partner for the Kremlin. Still, Putin will be keen to keep Belarus as a strategic ally and not to see street protests win out in yet another neighbouring state.

Lukashenko’s challenger in last week’s vote, Svetlana Tikhanovskaya, who was forced to flee to neighbouring Lithuania last Monday, called on Belarusians to protest this weekend in a video address released on Friday.

After horrific violence at the beginning of last week, riot police have left protesters alone since Thursday. Despite widespread shock and anger, the mood in the country has somehow become celebratory rather than mournful, with columns of smiling protesters holding aloft flowers and cheering, as if the revolution had already won.

While protests over the past three days have been decentralised and scattered across the city, the plan on Sunday is for all those opposed to Lukashenko’s rule to converge on the centre of Minsk. There are also reports of plans for a counter-rally of Lukashenko’s supporters, a constituency that has been entirely absent from view this week.

Indeed, Lukashenko has been losing support fast, with tens of thousands of workers from state controlled factories joining strikes. On Saturday, journalists at Belarusian state television, announced demands to report the news objectively, and were visited by the head of the Belarusian senate in an attempt to calm them down.

Overnight, the Belarusian ambassador to Slovakia released a video in support of the protests, saying a classmate of his daughter was one of those who had been badly beaten by police, and comparing their actions to those of Joseph Stalin’s NKVD, the secret police that tortured and executed hundreds of thousands in the 1930s.

Lukashenko’s appeal to Putin, plus a threat that those who continue to come out on to the streets would be “cannon fodder”, suggest that he is considering a new crackdown. The police and army remain under his control but there have even been a few isolated videos from smaller towns that seem to show police acting in solidarity with the protesters.

The mood in Minsk on Saturday was more akin to a street party after an unfancied national football team qualifies for the World Cup, than to the crucial stage of a revolution that has yet to succeed. Protest organisers have called for everyone to converge on central Minsk at lunchtime on Sunday, in what may be a crunch moment for both the protesters and the regime.