Belarus pledges to release all protesters as evidence of beatings mounts 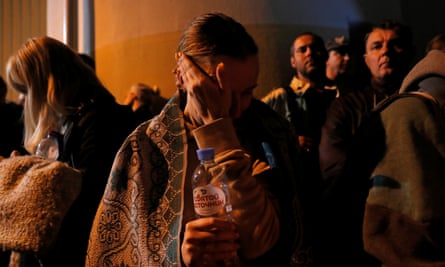 Belarus’s deputy interior minister has pledged to release all protesters by Friday morning, as evidence about beatings and mistreatment by police inside detention centres grew.

On Thursday night Alexander Barsukov told reporters outside the Okrestina detention centre in the capital, Minsk: “We will release everyone by 6am.”

Photographs from outside the detention centre showed detainees emerging to waiting friends and relatives late on Thursday night and early on Friday morning, but it was unclear if all detainees had been freed by the deadline set by Baruskov.

At least two protesters have died and thousands have been detained in a crackdown following President Alexander Lukashenko’s contested re-election.

His comments followed tens of thousands of Belarusians staging a wave of peaceful protests on Thursday against Lukashenko’s disputed re-election and an ensuing brutal police crackdown.

On Thursday night the authorities had begun releasing protesters, some of whom had bruises and described being held tightly packed inside cells. They also complained of mistreatment, including beatings. One woman described being beaten, having her clothes removed and being threatened with rape.

Amnesty International said detainees had testified that they received severe beatings and threats of rape.

“Former detainees told us that detention centres have become torture chambers, where protesters are forced to lie in the dirt while police kick and beat them with truncheons,” said Marie Struthers, Amnesty International’s director for Eastern Europe and Central Asia. “They described being stripped naked and subjected to sadistic beatings while listening to the screams of other victims.”

Earlier tens of thousands of people had formed human chains in the city, many wearing white and holding flowers and balloons, to protest against police brutality during four nights of unrest since Sunday’s vote.

Demonstrators held placards reading “Change!” and “No violence” and wore white bracelets, one of the symbols of the opposition movement.

Similar human chains formed in half a dozen other cities, local media reported.

The minister of internal affairs Yuri Karayev issued a rare apology over the police crackdown: “I take responsibility and apologise for injuries of random people at the protests who got it in the neck,” he said.

Another presidential ally, the head of a national state council, Natalya Kochanova, said on Thursday that Lukashenko had ordered an urgent review of the detentions.

“We don’t fight, we don’t need war,” she said. “By this evening more than a thousand people have been freed under an obligation of not taking part in unsanctioned events.”

The apparent change of tone of the officials underscored the vulnerability of Lukashenko’s hold over a country seen by neighbouring Russia as a strategic buffer against Nato and the European Union.

European countries condemned the police violence and the EU was set to discuss possible sanctions on Friday.

Earlier, ambassadors from EU countries laid flowers at the site where one protester died in Minsk, as a crowd cheered and chanted.

“We are here to mourn the loss of life and also to show solidarity with the victims of the violence and abuse that has taken place over many Belarusian towns and cities over the last few days,” EU envoy Dirk Schuebel told reporters afterwards.

The EU partially lifted sanctions, imposed over Lukashenko’s human rights record, in 2016. Germany called on the EU to put pressure on Lukashenko.

Several of those who have been detained in recent days told of widespread beatings and abuse inside holding facilities. In the early hours of Thursday authorities confirmed that a young man died in police custody, the second death since the protests began.

Alexander Vikhor, 25, had been detained on Sunday in the city of Gomel, south-east Belarus. Video footage showed police shooting passersby with rubber bullets and beating demonstrators with truncheons after their arrest.

Those detained have said they were held in overcrowded cells with insufficient food and water. The interior ministry has said it has detained some 6,700 people at protests since Sunday.

Lukashenko’s opponents accuse him of rigging the election to defeat his main rival, popular opposition candidate Svetlana Tikhanovskaya, who has left the country for neighbouring Lithuania.

Russia’s foreign ministry on Thursday claimed protests showed “clear attempts at outside interference”. But leaders of neighbouring Poland and the Baltic states urged Lukashenko to “terminate the use of force against your people immediately”.

Lukashenko has ruled Belarus since 1994 and for many years retained a significant base of support for his idiosyncratic form of autocracy, which drew on certain Soviet collective traditions preferred by the former collective-farm manager. The 65-year-old has faced increasing anger over his handling of the coronavirus pandemic – which he dismissed as a “psychosis” – a sluggish economy and human rights.

Prominent Belarusians have condemned the violence and urged Lukashenko to step down.

Belarusian writer, Svetlana Alexievich, winner of the 2015 Nobel literature prize, spoke of her shock at the “inhumane, satanic” actions of riot police and urged Lukashenko to go peacefully.