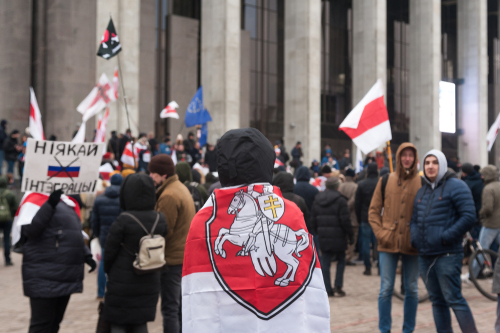 “I call on all friends of Belarus to stand in solidarity with Belarusians on Freedom Day, March 25th,”  exiled opposition figure Sviatlana Tsikhanouskaya wrote on Twitter, in reference to the anniversary of the country’s 1918 declaration of independence from Russia, which never came about.

Lukashenko’s government has vowed to retaliate against protests. “These are the absolute enemies of our state …and we will deal with them very quickly,” deputy Interior Minister Nikolai Karpenkov warned.

EU institutions refuse to recognise Lukashenko as a legitimate president of Belarus, following a suspect election in August last year. According to Brussels, the elections were neither free nor fair. Thousands of Belarus citizens have since taken to the streets to demand Lukashenko step down. In a brutal crackdown on the protests, more than 33,000 people have been detained to date, prompting Western states to impose and expand sanctions against Belarus.

Tsikhanouskaya, who was a presidential candidate in the August elections, was forced to leave the country. She facilitated the creation of the Belarus Coordination Council, which the EU recognises as the interim representative of the Belarus people. However, all seven members of the Council’s Presidium are currently either in detention, or have fled the country.

Lukashenko remains in power with the financial and diplomatic backing of Russia. Western diplomats believe Moscow wants to keep Belarus as a buffer zone between Russia and NATO members.