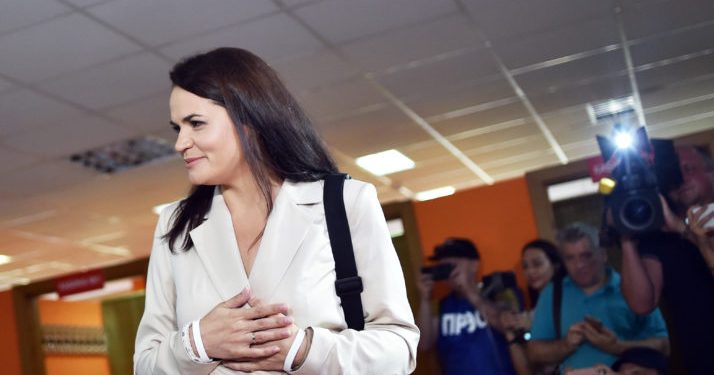 Belarus opposition politician Svetlana Tikhanovskaya is to talk with EU foreign ministers later on Monday as EU member states prepare sanctions against the Belarus regime over election rigging and the crackdown on anti-government protests, RFI reports.

Tikhanovskaya is to meet with EU ministers and appear in the European Parliament as part of efforts aimed at keeping up international pressure on President Alexander Lukashenko of Belarus. Appearing before the UN Human Rights Council (UNHRC) on Friday, she urged the international community to mount a strong response to the abuses in Belarus.

Demonstrators have hit the streets in the former Soviet republic, protesting against Lukashenko since he won the disputed 9 August election. Lukashenko responded with a violent crackdown while turning to his Russian allies for help.

The West has largely rejected the outcome of the vote, stressing that the elections were unfair, while the EU has moved to impose sanctions on some 40 members of the Lukashenko regime with travel bans and asset freezes. The EU, after rejecting the election results, warned that the situation in Belarus is deteriorating rapidly. Member states are to discuss whether to call for new elections.

EU-wide agreement on how to proceed with Belarus has been held up partly by Cyprus, which insists on imposing sanctions against Turkey over exploration in disputed waters in the Eastern Mediterranean.

Poland’s President Mateusz Morawiecki has called for a billion-euro stabilisation fund to help Belarus after Russia’s President Vladimir Putin expressed his support for Lukashenko and promised a loan equivalent to US$1.5 billion.

On Sunday, tens of thousands of opposition supporters protested in the Belarusian capital Minsk. More than 100 were arrested, France24 reports. The opposition has been organizing big protests every Sunday since Lukashenko won the election. The latest protest followed the police detaining hundreds of demonstrators at the women’s march in Minsk on Saturday.

The Belarus Government response to the demonstrations has been to deploy military trucks, water cannons, armoured personnel carriers (APCs) and widespread use of barbed wire in central Minsk. The Government also ordered a reduction in mobile internet coverage during protests and closed central Minsk metro stations.