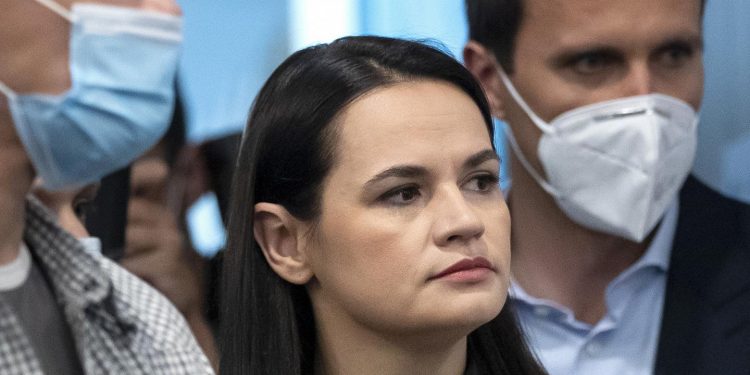 On Monday, the European Parliament’s Committee on Foreign Affairs held a hearing with the Belarus opposition leader Sviatlana Tsikhanouskaya, the main democratic contender who ran against Alexander Lukashenko in August’s Belarusian presidential elections.

Tsikhanouskaya finished second with some 10% of the popular vote in the election, which was marred by widespread accusations of fraud. An iconic figure to the protest movement that sprang up outraged by the election outcome, she was forced to flee to Lithuania and now acts as the country’s opposition leader in exile.

During Monday’s hearing, Ms.Tikhanouskaya urged the European Union to be “more courageous” and to adopt sanctions against the Belarusian government, since doing so would be an important show of support for the popular protest against the Lukashenko regime. She called on MEPs to reject association of any kind with organisations that might align with President Lukashenko and his supporters.

MEPs acknowledged Ms. Tsikhanouskaya’s request and endorsed the role of Belarusian civil society and the efforts to challenge the election outcome.

Ms. Tsikhanouskaya said the Belarus uprising did not constitute a geopolitical revolution since it was neither anti-Russian nor pro-Russian. Rather, she said, it should be seen as a “Belarusian democratic revolution”. The Committee also heard from Volha Kavalkova and Pavel Latushka, both of whom spoke on behalf of the Belarusian democratic opposition. Tey too appealed to MEPs and the EU to continue showing solidarity with the people of Belarus and to support Belarusian civil society and its beleaguered media.

The European Parliament already adopted a resolution on the Belarus situation last week in which MEPs called for new elections, as well as sanctions against the Lukashenko regime. Further sanctions are on the agenda of the Special European Council this week. In August, EU leaders agreed to adopt sanctions in response to the presidential election outcome which the EU does not recognise. A list established since contains the names of 40 individuals deemed responsible for violence, repression, and election fraud in Belarus.

The list of persons and organisation will be reviewed by EU leaders at this week’s summit. Actions taken will be in addition to the travel bans and freezing of assets adopted earlier this year and the arms embargo and export bans that were introduced in 2011. Starting in 2004, the EU has adopted a number of restrictive measures against Belarus.