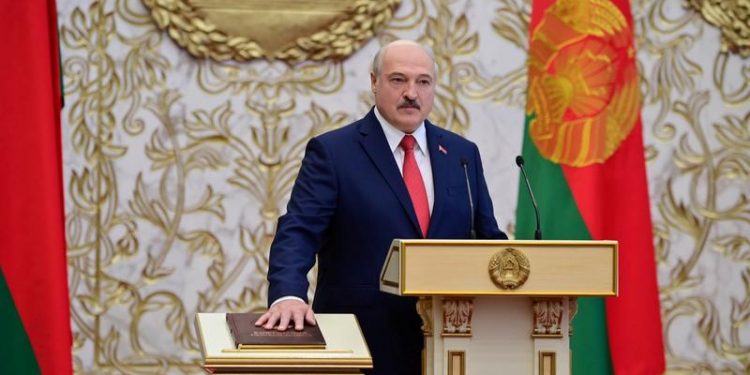 Brussels (Brussels Morning) Marking the first anniversary of the contested election that plunged Belarus into a wave of public protests, followed by a brutal crackdown on opposition, independent media and rights activists, the country’s strongman leader, Moscow-backed Alexander Lukashenko, has accused the opposition of attempting a coup.

The results of last year’s 9 August presidential election were rejected by the opposition, which claimed the elections were rigged to keep Lukashenko in power. The EU declared the elections were “neither free nor fair”. Yesterday, Lukashenko declared that he won the presidential election fairly, and went on to claim that the opposition was calling “for a coup d’état”.

Lukashenko has cracked down on the wave of protests that were sparked by the election outcome. As a result, most opposition figures either ended up in jail or fled the country. Hundreds of people were arrested. According to opposition claims, more than 600 political prisoners are currently in jails in Belarus.

The Belarusian regime has also cracked down hard on independent media, which reported on the protests and the police brutality that was used to curb them. It has also targeted the human rights activists, that have kept tabs on the number of the regime’s victims and monitored and reported on its near-ubiquitous disregard for their elementary human rights.

According to activists, Lukashenko has stepped up his efforts to obliterate civil society and the country’s independent media since July. Amnesty International has reported that at least 46 human rights and other civil society NGOs were shut down by 23 July this year, with more than 60 raids on the homes and offices of Belarusian rights organisations and their staff having taken place in just three days in July.

Belarus remains in the international media spotlight due to frequent reports illustrating the nature of Lukashenko’s regime, starting with the illegal downing of a commercial plane by the Belarus air force in May, done in order to arrest a dissident journalist and his girlfriend who were on board.

The EU imposed a fresh wave of sanctions against the individuals responsible, and has barred EU airspace to Belarus airlines. Lukashenko responded by manufacturing a refugee crisis on the border with Lithuania, flying in migrants from Iraq and Turkey, and escorting them to the border with the EU country, where they quickly overwhelmed Lithuania’s capacity to take in asylum seekers.

Last week, it was the Belarus’ Olympic team that was in the news when a female sprinter sought asylum in Poland’s embassy in Tokyo, claiming that her coaches received orders to bring her back to her home country after she dared to openly criticise the coaching team. In parallel, a Belarus activist living in exile in Ukraine was found hanged from a tree, after his friends and colleagues reported he was being followed. Police are treating the death as a murder.