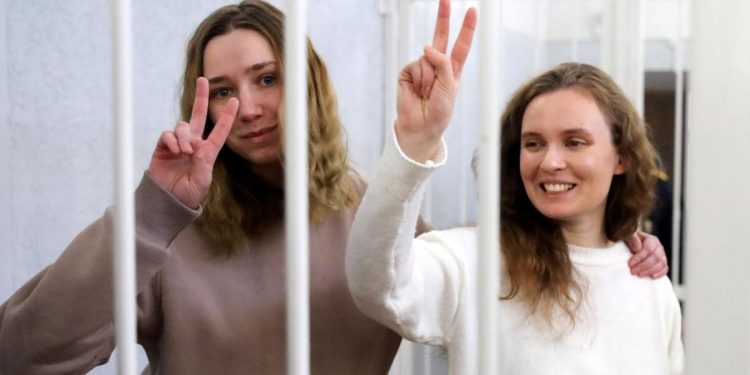 Brussels (Brussels Morning) Two Belarusian journalists working for a Polish-based TV new channel were sentenced to two years in prison on Thursday, after they were arrested for filming public protests in the country, Reuters reported.

The authorities arrested Katsiaryna Andreyeva, 27, and Darya Chultsova, 23, for filming the November protests, held over the death of a protester who was killed by police several days earlier. They were charged with “orchestrating the demonstrations” by filming them.

The two journalists – reporter and camera operator – were confined to a cage on Thursday as they attended the hearing where they received their sentence. Both pleaded not guilty.

More than 33.000 people have been detained so far, in a violent crackdown on protests held against President Alexander Lukashenko, following a suspect election in August last year. EU institutions maintain that the elections were “neither free nor fair”, and the EU does not recognise Lukashenko as a legitimate leader of Belarus.

The regime’s reaction to the resulting protests prompted Western countries to impose new sanctions on Belarus. Lukashenko continues to refuse to step down and is supported by the country’s closest ally, Russia.

The EU currently recognises the Belarus Coordination Council as the interim representative of the Belarus people. The Council was created at the recommendation of presidential candidate Sviatlana Tsikhanouskaya to facilitate the democratic transfer of power. All seven members of the Council’s governing body, the presidium, are currently either in detention or have fled Belarus.

The New York-based Committee to Protect Journalists had previously called on Lukashenko to drop charges against Andreyeva and Chultsova. The two journalists worked for the Poland-based Belsat TV, which employs mainly Belarus journalists and specialises in news from Belarus.