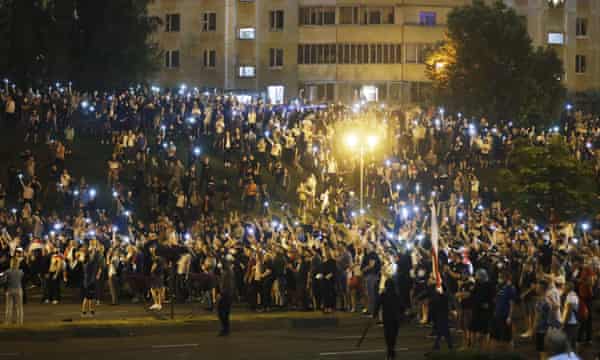 Clashes broke out in cities across Belarus on Sunday evening as riot police used rubber bullets, flash grenades, teargas and water cannon to quash protests against the results of the contested presidential election.

Alexander Lukashenko, who has ruled for 26 years, claimed he had won a landslide victory in an election marred by accusations of vote-rigging. The election commission claimed Lukashenko was ahead with 82% of the vote in preliminary results on Sunday evening. The opposition, led by Svetlana Tikhanovskaya, had held some of the country’s largest political rallies since the days of the Soviet Union.

Large protests broke out soon after the polls closed in Minsk, where a crowd of thousands gathered in the centre of the capital. A reporter for the Guardian saw police use water cannon against protesters and was fired on by rubber bullets. Opponents of Lukashenko chanted, “Leave!” Police made dozens of arrests. In one video, an army truck appeared to run into a protester.

Fighting was also reported in approximately 20 other cities, including Gomel and Vitebsk. In several smaller cities, however, riot police were reported to have refused to engage protesters or retreated.

“It’s certainly the biggest protest I’ve ever seen in Belarus since Lukashenko came to power,” said David Marples, a professor at the University of Alberta and an expert on Belarus. “In terms of the elections that Lukashenko’s held, there’s been nothing like it. It seems to me that the whole country really is in favour of change.”

The decision to put down the protests violently has raised questions about the loyalty of interior ministry troops and whether Lukashenko’s own nerve could fail if he felt personally threatened by the protests.

“We don’t really know how brave he is. He’s never been in a situation where he needs to be brave,” said Marples.

The state news agency, Belta, said police were “in control of the situation at unsanctioned mass events”.

Tikhanovskaya’s campaign had stopped short of calling for street protests, urging supporters to contest the elections by legal means.

Late Sunday evening, Tikhanovskaya issued a call to riot police to cease attacks on protestors and for an end to “provocations” by her own supporters. “I want to ask the militia and troops to remember that they are part of the people,” she said. “Please, stop the violence.”

Her campaign claimed to have won at a majority of polling stations in Minsk.

As polls closed at 8pm, a state exit poll gave Lukashenko 79.7% of the vote and just 6.8% to Tikhanovskaya. An estimated 9.2% voted “against all”, according to the poll, a tradition dating from Soviet days.

The claim of a landslide vote appeared to increase the danger for Tikhanovskaya, who went into hiding on Saturday evening after nine of her campaign staff were arrested. She emerged on Sunday to vote but remained in a protective bubble of campaign staffers and journalists, which press secretary Anna Krasulina called “the most trustworthy defence we have”.

Tikhanovskaya, who entered the campaign after her husband was jailed, has sent her children abroad after she said their lives were threatened.

Andrei Yeliseyeu, director of the Warsaw-based EAST centre, warned earlier in the evening that the apparent blowout result, combined with claims of vote tampering, “will enrage the public”. “The people are well aware that Lukashenko does not have this impressive majority presented by the exit poll results,” he said.

Thousands of voters were left outside polling stations in Belarus and embassies after the government refused to extend voting hours beyond the 8pm cutoff.

Earlier on Sunday evening, a Guardian reporter encountered small groups of young people wandering around downtown Minsk, where many streets have been closed off by police to prevent a backlash against the election result.

One woman, referring to the large numbers of riot police in the city centre, taunted them: “Look how many there are, it’s like a football match! Standing like bunnies on every corner.”

The clashes with police were some of the largest in the country’s history. Photographs from the protests showed field medics treating demonstrators with bloodied faces. An AP photographer was taken to hospital after being beaten unconscious by riot police inside a police van.

Lukashenko, who has revelled in being labelled “Europe’s last dictator”, has consolidated immense power over 26 years of rule in Belarus and is seeking a sixth term in office.

Observers pointed to record numbers of early votes as a likely sign of ballot stuffing, with nearly 40% of eligible Belarusians reportedly casting their ballots before polls opened on Sunday. Several polling stations ran out of ballot papers on Sunday as they appeared to surpass 100% of eligible voters.

One video from a polling station appeared to show a member of the electoral commission climbing down a ladder from a second-storey window with a bag assumed to contain voting slips.

Pro-Tikhanovskaya voters said they wanted to see change, a popular slogan for the campaign, or thought that Lukashenko had overstayed his time in office. But many were pessimistic about the chances of the vote being counted fairly.

Zoya Vlasenko, a retired engineer, said she was voting against Lukashenko for her grandchildren’s sake. “I don’t want them to have to leave their homeland,” she said. Her oldest son has already left to work in the US. “But now there’s hope that my grandchildren can stay here.”

Others said they were angry about the arrests of activists and the threat of violence against the opposition. There were already signs of a crackdown in the runup to the vote, as armoured cars, water cannon and riot police were reported in the centre of Minsk near the presidential administration. Armed men had also been seen at highway entrances to the city.

“There are armoured cars on the highway, there are people not even in uniform, in jeans and T-shirts with rifles in their hands,” said Vladimir, a local businessman who came to the polling station with his wife and young son. “It’s scary when you don’t know if someone is a bandit or a member of law enforcement. I’m voting against being afraid.”

Local journalists reported problems with Telegram, Twitter, Viber, WhatsApp, and websites associated with opposition parties and platforms for monitoring the vote. Netblocks, a civil society group, said internet connectivity had been “significantly disrupted in Belarus amid the presidential elections”.

Nigel Gould-Davies, a former UK ambassador to Minsk, called the election a “dangerous farce” and said the west should impose further sanctions on Lukashenko. Referring to Tikhanovskaya’s campaign, he wrote: “What is happening in #Belarus is the last phase of a great reordering of European politics that began in 1989.”

Supporters of Tikhanovskaya have said that her campaign has transformed the country and would have a profound impact on the future of the country’s politics.