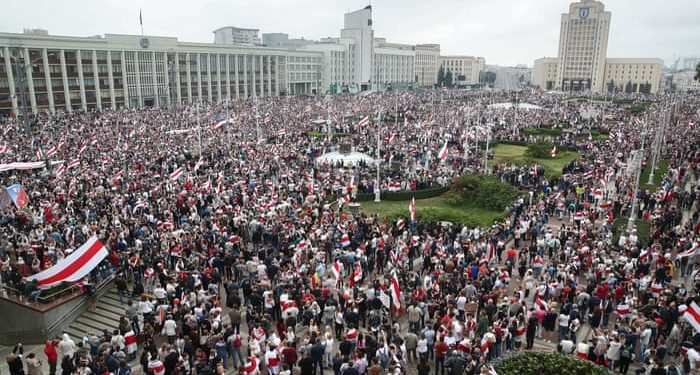 Defiant protesters have flooded central Minsk again in a sign that even a threat to use the army was not enough to quell the uprising against Belarus’s authoritarian president, Alexander Lukashenko.

The vast square outside the parliament was turned into a sea of red and white by protesters waving the traditional Belarusian flag adopted by the protest movement and chanting “resign!” and “put Lukashenko in a police van!”. Unofficial estimates put the crowd at 150,000 people or more.

Later in the evening, as protesters marched across the city, a helicopter flew low over one part of the crowd toward Lukashenko’s working residence.

Footage later released on a social media channel close to Lukashenko’s press service showed the president, clad all in black and holding a rifle, observing the protests from inside the helicopter. “They’ve run away like rats,” he said, as he ordered the pilot to move closer.

Shortly after landing at his working residence, he ventured outside to congratulate a cordon of riot police, who applauded Lukashenko. One of them could be heard to say “We are with you to the end”.

Protests have been ongoing for two weeks, since Lukashenko declared victory in an election widely believed to have been rigged against the united opposition candidate Svetlana Tikhanovskaya and a subsequent brutal crackdown by riot police.

After a huge rally last Sunday, Lukashenko has attempted to regain control by addressing carefully assembled crowds of his own supporters and threatening protesters with more violence, painting them as puppets of nefarious foreign backers.

Before this Sunday’s rally, the defence minister, Viktor Khrenin, released a threatening video address, claiming protesters were defacing second world war memorials and highlighting the use of the red and white protest flag in the past by some Nazi collaboration forces.

“We cannot calmly look on at how people are going to these places to hold rallies, with the same flags under which fascists organised the murders of Belarusians, Russians, Jews and others,” said Khrenin.

“We cannot allow this, and I categorically warn that if order and calm is disturbed in these places, you will not be dealing with the police, but the army.”

At 2pm, the appointed protest hour, there was a sinister atmosphere around Independence Square. A few thousand protesters had arrived and were being addressed by an ominous voice through loudspeakers, telling them their gathering was illegal and they should disperse.

Authorities closed down central metro stations and implemented checks on roads into Minsk to keep the numbers down. In many of the streets around the square, army trucks stood packed with riot police, the outlines of their shields bulging through the dark green tarpaulin. The overcast weather added to the sense of foreboding.

But then columns of people began to arrive, and they kept arriving, until the cavernous expanse of the square was filled with red and white flags. The crowd stretched back far down the broad Independence Avenue that leads to it. Cheers, whistles, and chants filled the air, many of them personally directed at Lukashenko.

The last week has shown that peaceful protest may not be enough to unseat Lukashenko, but while people continue to come out in such numbers, it is hard to see how they can be tackled using brute force either, and with each new protest the authoritarian leader’s legitimacy fades further.

Imported Russian television and propaganda advisers are pushing the line that the protesters are inspired by Nazi ideals or are intent on causing ruin to the country, but people who look out of their windows instead of at the television set will see a very different picture: an expanse of smiling faces, young and old, peacefully but firmly demanding political change.

After rallying outside parliament, columns of protesters made their way to a huge expanse of land outside a second world war memorial, where last week’s large rally was held. Soldiers had cordoned off the memorial with barbed wire and barricades, and the two sides stood off against each other. Thousands of protesters streamed past the soldiers, some of them shouting “shame!” and others imploring them to join the protests.

Lukashenko visited a military range in western Belarus on Saturday and suggested Nato troops were preparing to invade, reiterating that he had put the army on full combat alert. “The fatherland is in danger,” he said.

Nato put out a statement denying any military buildup on the border with Belarus. “As we have already made clear, Nato poses no threat to Belarus or any other country and has no military buildup in the region. Our posture is strictly defensive,” said Oana Lungescu, the alliance’s spokeswoman.

Lukashenko has publicly asked Russia’s president, Vladimir Putin, to intervene with military help to restore order. Putin has so far refrained from direct intervention, but he held a meeting of his security council on Friday to discuss events in the country. A change of tone in Russian television coverage of the protests suggests that the Kremlin has decided to back Lukashenko for now.

The Russian foreign minister, Sergey Lavrov, said on Sunday that it was impossible to prove Lukashenko did not win the election and accused the opposition leaders of wanting bloodshed in the country, despite all of them repeatedly saying they are only calling for peaceful protest.

Maria Kolesnikova, a member of Tikhanovskaya’s team who has remained in Belarus, said over the weekend that whatever happened with the protests, the processes now under way could not be reversed.

“I am certain that the desire of Belarusians to be heard will not weaken, maybe it will just take on different forms. But the popular resistance that has started can’t just be put down with force,” she said.