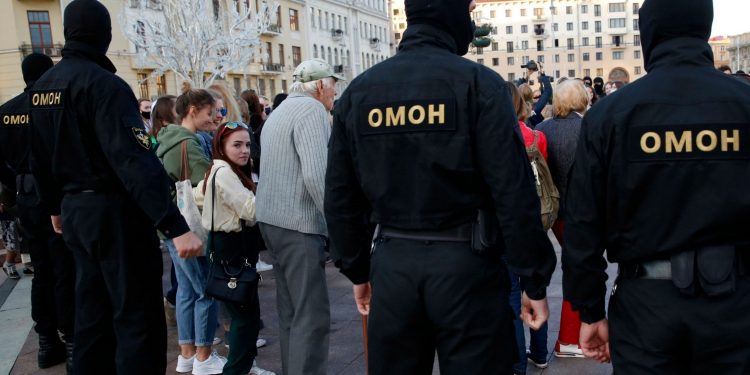 Belarusian authorities have deported two Russian cameramen and withdrawn the accreditation of several foreign media journalists, including the BBC’s, in advance of fresh demonstrations challenging the results of the presidential election.

On Saturday the BBC’s press team said two journalists working for its Russian service in Minsk had had their press accreditation revoked “with immediate effect”.

“We condemn in the strongest possible terms this stifling of independent journalism. We call upon the Belarusian authorities to revoke this decision and allow our journalists to continue doing their jobs,” it tweeted.

“We believe it is vital for the people of Belarus to have access to impartial, independent information about events in their country.”

One BBC journalist to lose her accreditation is Tatyana Melnichuk.

She told Agence-France Presse: “The Belarusian foreign ministry called me and informed me that my accreditation and that of one of my colleagues as BBC correspondents had been cancelled. They demanded that I return my card.”

Belarusian government spokesman Anatoly Glaz said the decision was taken on the recommendation of the country’s counter-terrorism unit, AFP reported.

He did not specify how many journalists were affected by the measure, but foreign media including the BBC and Radio Liberty reported the withdrawal of accreditation of several of their journalists.

Two of broadcaster ARD TV’s Russian cameramen and a producer, from Belarus, were also arrested in Minsk on Friday evening before being released again on Saturday.

West German Broadcasting (WDR), which runs the TV station, said on Saturday their Russian employees were “on their way to Moscow” after being banned from Belarus for five years, while their producer was due to face trial on Monday.

“This shows again that independent reporting in Belarus is becoming more and more difficult and almost impossible,” he said.

“As a public service broadcaster, however, we will not be intimidated and will do everything in our power to ensure that our journalists can continue to report critically and independently on the events, protests and demonstrations in Belarus.”

The Belarussian Association of Journalists has named the cameramen as Sergey Sergeyev and Mikhail Fomin and the producer as Ilya Kuzniatsou. The Guardian has approached Kuzniatsou for comment.

Swedish photojournalist Paul Hansen was given 24 hours to leave the country and banned for five years on Friday.

He was one of 50 reporters rounded up by riot police on Thursday and taken into custody, ostensibly so their documents could be checked.

Most of the journalists were later released but four Minsk-based correspondents were detained overnight and appeared in court on Friday, charged with organising illegal protests.

They included the photographer Alexander Vasukovich and Katsiaryna Andreyeva, a reporter with the independent Belsat TV channel.