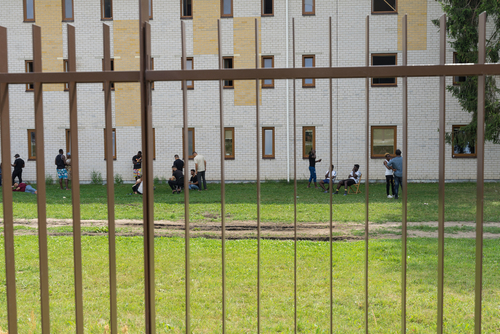 Brussels (Brussels Morning) Belarusian President Alexander Lukashenko has proposed a bill to freeze the migrant accord with the EU.

The Belarusian government announced it could suspend the agreement under which Belarus has to take back migrants who enter the EU from Belarus and violate their terms of entry, stay or residence, according to Reuters reporting on Wednesday.

The migrant accord between the bloc and Belarus signed at the start of 2020 was a precondition for a simplified EU visa regime for the country.

“The document was prepared in response to the unfriendly actions taken by the EU and its member states towards Belarus,” the President’s Press Service noted.

Some EU member states have accused Belarus of pushing migrants across the border with the bloc illegally, in response to EU sanctions imposed on the country.

Belarus blames the EU for the dispute that has left a group of migrants stranded at the border with Poland; this led to the Belarusians introducing a state of emergency in two border regions.

Friction between the EU and Belarus increased after the Belarusian authorities cracked down on anti-government protests in the wake of the disputed presidential election in August last year.

Belarusian authorities detained tens of thousands of people after the  election, with protesters insisting that the election was rigged to keep Lukashenko in power.

Lukashenko enjoys financial and diplomatic support from Moscow and is to meet his Russian counterpart Vladimir Putin today ahead of joint military exercises.

On Wednesday, the EU mission in Minsk delivered a démarche to the Belarusian authorities, pointing to a 50-fold increase in illegal border crossings.

“The EU condemns the instrumentalisation of migrants for political purposes and urges the authorities in Belarus to stop this practice,” the bloc said in a statement and added “irregular migration cannot be used as a bargaining chip.”