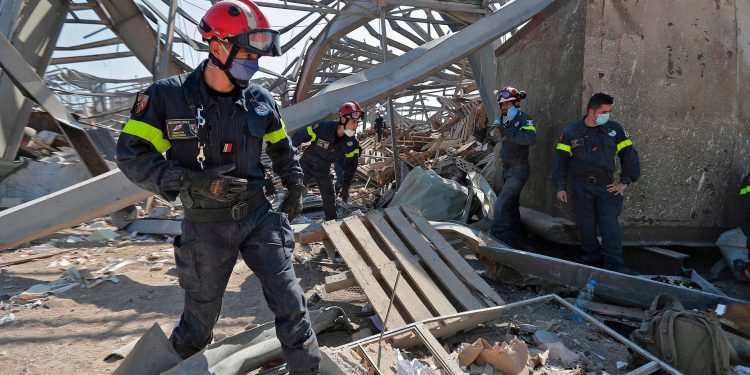 Search and rescue teams, firefighters and medics continued to comb through what remains of Beirut port on Friday, competing for space with men who were not wearing uniforms or displaying official status, and who several observers said were directing clean-up efforts.

As international rescue teams arrived in the Lebanese capital to help with the recovery, the scene of the explosion appeared increasingly frantic, with ambulances and unmarked vans repeatedly entering the site. A Dutch team that had just arrived in Lebanon was initially kept away by Lebanese officials who insisted the sniffer dogs they brought with them were not allowed.

“Then they sent them to parts that didn’t really matter,” said one senior official. “It has raised the suspicions of many here. Hezbollah have sent their people, and everyone is speculating why?”

As a massive recovery effort slowly gathers momentum, how flimsy sheds at the entrance to the Lebanese capital could have been deemed safe for an enormous stockpile of one of the world’s deadliest explosives, was being heatedly thrashed out.

Just as hotly debated was how a political class blamed for the debacle could be trusted with finding answers. As anger mounted, one of the country’s leading broadcasters, LBC, announced it would no longer broadcast any political speeches or statements by leaders about a promised probe into the catastrophe.

The unprecedented boycott of Lebanese leaders and officials meant neither speeches by president Michel Aoun, or the Hezbollah leader, Hassan Nasrallah, were broadcast on LBC on Friday.

“The capital of Beirut was destroyed and you’re still trying the same sort of evasive tricks,” said LBC chairman, Pierre Daher. “You cannot continue this way. Let this be a message to you.”

At the same time, a former port worker revealed to the Guardian he had been told four years ago to move 30-40 nylon bags of fireworks into the warehouse containing the ammonium nitrate – a decision he said he had opposed at the time and, along with other colleagues, continued to protest.

Yusuf Shehadi, who left his job six months ago, but who spoke to some of his former colleagues on Tuesday, said workers were attempting to fix a gate outside warehouse 12 with a welder ahead of the blast. “This was at 5pm, and after 30 minutes they saw smoke. Firefighters came, and so did state security. Everyone died. It is my belief that this repair work led to this catastrophe,” said Shehadi.

“But there were 30-40 nylon bags of fireworks inside warehouse 12. Customs confiscated the fireworks around 2009-10. I was a supervisor of the forklift, we stored the fireworks in hangar 12, and, around 2013, customs seized large amounts of chemicals (ammonium nitrate). They were stored in the same hangar.”

He added: “This was a disaster waiting to happen.”

Shehadi said he was talking to Imad al Zahradin, a guard at the port, on Tuesday. “We were having a chat about the union and work in general, and he told me that they were fixing the gate of hanger 12.”

Al-Zahradin was one of the 137 people killed in the blast, including the entire firefighting team and numerous port workers, many of whom had been Shehadi’s colleagues.

Video of a fire seconds before the enormous explosion ravaged east Beirut appeared to show a chain reaction of small explosions, resembling fireworks. “They were exactly where I left them,” said Shehadi. “And when the fire got to them, it was the end.”

In a televised appearance, Nasrallah said Hezbollah was not linked to the ammonium nitrate and denied that the party had influence at the port. He said all international aid would be welcomed and called for solidarity.

France called for an international inquiry into the catastrophe – which is now being regarded as one of the biggest industrial accidents in history. The explosion destroyed Lebanon’s only functional grain silos and dramatically limited its ability to receive imports by sea.

“The French are right,” said Ashrafieh resident Rita Ghaddar, 36, whose home was one of thousands damaged. “The arsonists can’t be trusted to probe the blaze. At the very least, this was catastrophic incompetence. At every level of this disaster is the story of what happens when mafias run a country.”

Jumana Baghdadi, a nurse, who was protesting outside a university on Thursday, said a sceptical and angry public would need a lot of convincing that any inquiry would reach culprits. “The pact is they give each other cover,” she said. “That’s the way it’s run. We won’t let them get away with it this time.”