Beirut families search for loved ones feared trapped under rubble 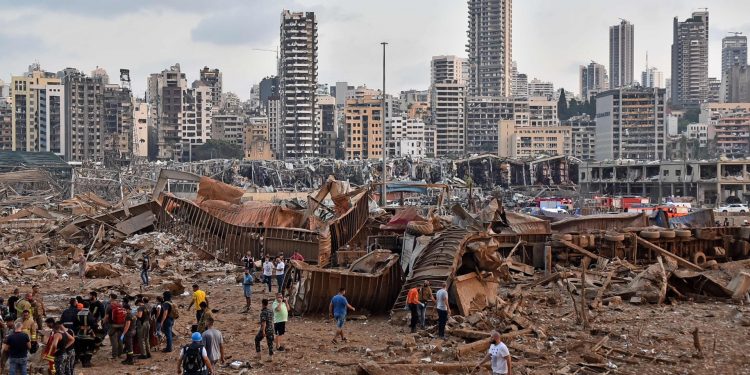 They carried his photo across Beirut all night, from one hospital to the next, asking if anyone resembling Ghassan Hasrouty was among the injured or dead. At each one, they found nothing.

“That was our night,” Ghassan’s son Elie says. “Trying to find a match and spread the word.”

Hasrouty’s family are now confronting another possibility: that he is buried under the rubble of Beirut’s port, one of at least dozens of Lebanese still missing after a gigantic explosion at the site on Tuesday evening that killed at least 100 people and wounded another 4,000.

Social media lit up overnight with images of fathers, daughters, sons and mothers who are yet to be found since the blast, which shattered windows miles away and was heard across the sea in Cyprus.

Hasrouty, 59, was part of a team of seven people in the operations room of the port’s grain silo, and was last heard from about 5.30pm on Tuesday, telling his wife that a ship was taking its time unloading and not to expect him home until morning.

At 6.05pm, Beirut shook. “When I saw the explosion next to the grain storage, I knew that under the high pressure he might be injured,” Elie says. “I checked if he was on duty, and it happened that he was.”

Frantic calls to Hasrouty’s phone failed to connect, as the country’s telecommunication grid strained under the weight of thousands of people dialling their family and friends at once.

The death and injury toll spiralled through the night and Wednesday morning as hospitals – some also destroyed by the explosion – struggled to register the arrivals. News anchors read lists of names on air, both of the survivors and the dead.

Amid the carnage, residents have been rallying and trying to support each other as best they can. Instagram accounts have been created compiling the missing, listing phone numbers and providing updates on their cases. Another Instagram account was established with offers of accommodation for anyone whose house was destroyed. “For anyone who needs a shelter, our door is open for you,” one said.

In a country already reeling from the worst financial collapse in its modern history, and which imports 80% of its grain, the destruction of the wheat stores where Hasrouty was working threaten to tip Lebanon into serious food shortages.

“We have wheat,” the country’s economic minister said on Tuesday night, but admitted significant stores were incinerated. A local media outlet reported the country had around a month-and-a-half of stock remaining – enough to ward off an immediate crisis.

At least 300,000 homes have been damaged, many no longer habitable, said the Beirut governor, Marwan Abboud. Tens of thousands of people will need to repair their buildings and reinstall windows in an environment where the Lebanese currency has lost about 80% of its value, and imports will be significantly slower to arrive.

On Wednesday morning, Elie Hasrouty tried contacting security officials – anyone he could reach to ask them to bring machinery and start removing debris from the flattened building where his father was working.

“We were expecting there would be more professionalism and efficiency in taking the ruins away and finding the people underneath. They are known to be there, they were on duty,” he says. “So far we’ve been told no special equipment has reached there. They’ve started on another area, but they need to work on the operations room.”

He admits the site looks devastated, but the family is clinging to hope. “I spoke to his colleagues and they said the structure of the building where he worked has alcoves and areas where you can take shelter,” he says. “So it’s important to remove the rubble as fast as possible so the people underneath can get out.”