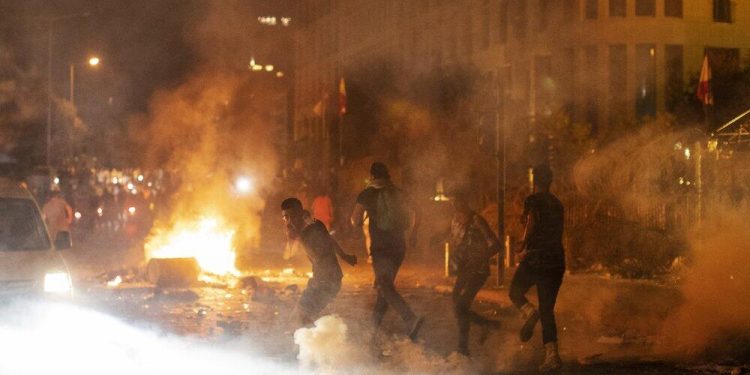 Lebanese security forces have fired teargas at demonstrators in Beirut, as rage over the country’s leadership grew following a massive explosion that laid waste to large parts of the capital on Tuesday.

State media reported late on Thursday that security forces confronted dozens of anti-government protesters in central Beirut. Some in the small protest were wounded, the National News Agency (NNA) reported.

Protesters had gathered near parliament, where a small fire was lit and stones were thrown at security forces, according to NNA.

Shock has turned to anger in the city where 154 people died and more than 5,000 were injured when a huge pile of ammonium nitrate that had languished for years in a port warehouse ignited.

Volunteers continued arriving from across Lebanon to clear dust and debris from the neighbourhoods surrounding the blast site. Some people returned to their shattered homes and shops for the first time since the explosion.

“What do you want me to say?” a woman named Hilda, inspecting the wreckage of her gift shop, told the Lebanese broadcaster LBCI. “There’s nothing left of the neighbourhood, not just our store.”

She added: “I won’t rebuild in this country. They [the politicians] had left us our work and homes – and now they’re gone. If something changes, we’ll rebuild. If not, then I won’t. Let them rebuild.”

Lebanon’s president Michel Aoun said on Friday an investigation would examine whether “external interference through a rocket or bomb or other act” played a role in the blast. He has previously blamed negligence in the storage of highly explosive material for years at the port.

On Thursday Lebanon’s ambassador to Jordan announced her resignation, saying “total negligence” by the country’s authorities signalled the need for a leadership change.

In a televised statement Tracy Chamoun said she could no longer tolerate the government’s ineptitude.

“I am announcing my resignation as an ambassador … in protest against state negligence, theft and lying,” said Chamoun. “This disaster rang a bell: we should not show any of them mercy and they all must go,” she added. “This is total negligence.”

It is the second resignation by a Lebanese official since the explosion. A lawmaker, Marwan Hamadeh, resigned on Wednesday over the blast, which authorities said was triggered by a fire igniting 2,750 tonnes of ammonium nitrate.

The death toll rose to 154 on Friday, and was expected to further increase as rescue workers kept digging through the rubble.

Even as they counted their dead, many Lebanese were consumed with anger over the blast. “We can’t bear more than this. This is it. The whole system has got to go,” said 30-year-old Mohammad Suyur.

The small demonstration on Thursday night, as well as a flood of angry social media posts, suggested the disaster could reignite a cross-sectarian protest movement that erupted in October but faded because of the grinding economic hardship and the coronavirus pandemic.

Aoun and the prime minister, Hassan Diab, have promised to put those responsible for the disaster behind bars. A military prosecutor announced 16 port staff had been detained.

Trust in institutions is low and few on Beirut’s streets hold out hope for an impartial inquiry. The country’s ruling class has long been accused of ineptitude and corruption, and has become the target of a protest movement that began in October demanding systemic change.

The small Mediterranean nation has since been gripped by its worst economic crisis since the 1975-90 war, further fuelling anti-government sentiments.

Many have raised questions as to how a huge cargo of highly explosive ammonium nitrate could have been left unsecured in the capital for years.

On Thursday, the French president, Emmanuel Macron, toured the city’s devastated port and surrounding suburbs, as hundreds of people in one neighbourhood called for revolution and the downfall of the government.

“I guarantee you this – aid will not go to corrupt hands,” Macron told the protesters. “I will talk to all political forces to ask them for a new pact. I am here today to propose a new political pact to them.”

But he also warned that the country – already in desperate need of a multibillion-dollar bailout and hit by political turmoil since October – would “continue to sink” unless it implemented urgent reforms.

The International Monetary Fund, whose talks with Lebanon started in May but have since stalled, warned it was “essential to overcome the impasse in the discussions on critical reforms”.

The IMF urged Lebanon – which is seeking more than $20bn (£15bn) in external funding and now faces billions more in disaster costs – “to put in place a meaningful programme to turn around the economy”.

Lebanon’s diaspora, believed to be nearly three times the tiny country’s 5 million population, has launched fundraisers and wired money to loved ones.

In Beirut, volunteers handled much of the cleanup. Husam Abu Nasr, a 30-year-old volunteer, said: “We don’t have a state to take these steps, so we took matters into our own hands.”