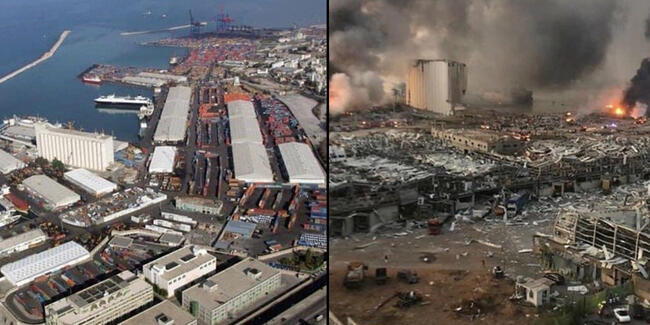 International rescue workers and aid have begun arriving in the ruins of Beirut, joining local teams combing the rubble for signs of life after a huge explosion on Tuesday destroyed swaths of Lebanon’s capital.

From Australia to Indonesia to the EU, Russia and the United States, governments mobilised to send in aid ranging from sniffer dogs to a mobile hospital to help a country already struggling with the worst economic crisis in its modern history.

The EU gathered emergency workers and equipment from across the 27-nation bloc, and was urgently sending more than 100 firefighters with vehicles, sniffer dogs and equipment designed to find people trapped in urban areas.

The explosion at the capital’s port – in which thousands of tonnes of ammonium nitrate ignited – killed at least 135 and injured about 5,000, the health ministry said, and sent shockwaves through half of the city. About 300,000 homes were badly damaged.

France sent two planeloads of specialists, rescue workers and supplies to Beirut on Wednesday, and president Emmanuel Macron is due to visit on Thursday, in recognition of the gravity of the disaster and France’s special relationship with its former protectorate.

The World Health Organization was airlifting enough medical supplies to cover up to 1,000 trauma procedures and up to 1,000 surgeries, following a request from the health minister. Beirut’s hospitals, already bucking under the coronavirus pandemic, were overwhelmed with casualties on Tuesday.

In an attempt to take the pressure off the local health system, Russia flew in a mobile hospital, along with 50 emergency workers and medical personnel. Another three Russian flights are scheduled to arrive within the next 24 hours, carrying equipment for a coronavirus testing lab and protective gear, among other relief supplies.

However, the pledges of aid raised new questions for a country whose economic and political crisis, combined with endemic corruption, have made donors wary in recent years.

In a visit to Lebanon less than two weeks ago, French foreign minister Jean-Yves Le Drian made clear that France, Beirut’s steadfast economic backer, would withhold support not destined directly for the Lebanese population, until “credible and serious reform measures” were under way.

About $11bn was pledged to Lebanon at a 2018 Paris conference – but on condition reforms are undertaken.

US secretary of state Mike Pompeo reaffirmed “our steadfast commitment to assist the Lebanese people” in a phone call with prime minister Hassan Diab, but it remained unclear what support might be forthcoming.

The United Nations was stepping up emergency assistance, said UN deputy spokesman Farhan Haq on Wednesday, adding that more than 100 UN staff and dependents were injured in the blast.

“It would seem given the amount of damage that there will be a need for additional international support for Lebanon,” he said, adding that the UN was heartened to see support from many governments.

“We expect that the damage at the port will significantly exacerbate the economic and food security situation in Lebanon, which imports about 80-85% of its food,” Haq said.

UN peacekeepers and staff in Lebanon were assisting in the emergency response, with specialists en route to support urban search and rescue operations, Haq said.

Rescue teams said there was still hope of locating survivors among the debris.

Timo Eilhardt, chief of operations of Germany’s civil protection organisation THW, said there was normally a good chance of finding survivors more than 72 hours after a disaster, “which means we can expect to find people for another two to three days”.

Lebanon’s diaspora, estimated at nearly three times the size of the country’s population of five million, also stepped up to provide assistance. Expats rushed to wire money to loved ones, while others worked to create special funds to address the tragedy. One JustiGiving page set up by non-profit Impact Lebanon has raised more than £4m.

“I’ve been on the phone all morning with … our partners in order to put together an alliance for an emergency fund in light of the explosion,” said George Akiki, co-founder and CEO of LebNet, a non-profit based in California’s Silicon Valley that helps Lebanese professionals in the US and Canada. “Everyone, both Lebanese and non-Lebanese, wants to help.”