Beirut explosion: how you can help victims in Lebanon 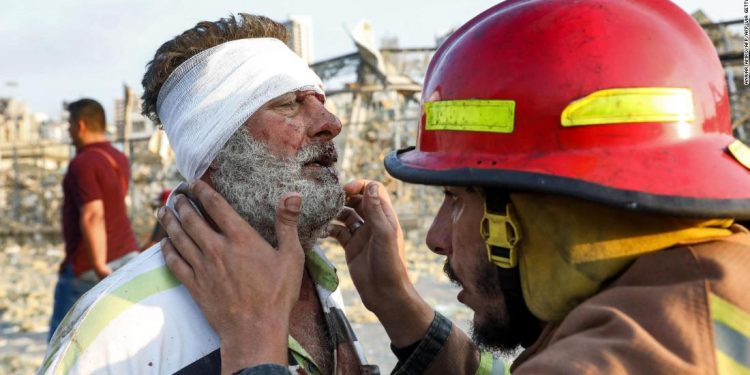 Large swaths of Beirut were destroyed on Tuesday when a huge blast ripped through the Lebanese capital. The explosion, blamed on 2,700 tonnes of ammonium nitrate stored at the port, sent a shockwave across the city that shattered windows and collapsed roofs. The death toll stands at at least 135, with around 5,000 injured.

The governor of Beirut has estimated the cost of the damage as more than $3bn and said up to 300,000 people had suffered damage to their homes, leaving some uninhabitable.

The disaster hit a nation already struggling with an economy in free fall, rising food prices and the coronavirus pandemic.

Here is a list of organisations seeking donations to help Lebanon’s victims:

The Lebanese Red Cross (LRC) is an independent organisation focussed on disaster prevention and relief. It is the main provider of ambulances in Lebanon, and relies on volunteers. The LRC was central to treating people injured in the nationwide protests that started in October last year and the coronavirus pandemic this year, as well as treating and transporting people following the explosion. Its services are provided for free to those who need them.

The blast destroyed grain silos that contained around 85% of the country’s grain supply. Lebanon’s economy minister, Raoul Nehme, said the wheat in Beirut’s port granaries cannot be used and that the ministry has lost track of seven employees at the site. He said food supplies were en route. Up to 80% of the country’s food is imported, most of it via the port destroyed by the explosion.

Food prices had already increased by up to 80% due to the country’s economic crisis, and there are fears that many people who were already living in food-insecure households will struggle. Before the blast, the World Food Programme estimated that 49% of Lebanese were “worried about access to food”.

United Nations deputy spokesperson Farhan Haq said on Wednesday: “We expect that the damage at the port will significantly exacerbate the economic and food security situation in Lebanon.”

Impact Lebanon raises money from the Lebanese diaspora (who outnumber Lebanese living in the country) and is currently raising money specifically to house people whose homes were destroyed in the blast. Money donated will be used to pay for hotel or apartment fees, the charity says.

The organisation also has a general disaster relief fundraising campaign for Beirut.

“Beit el-Baraka works on three levels: the supermarket where you can gracefully, and with dignity, choose whatever you need, the apartments that are restored for free and whose rent we pay and medical treatments, which include surgeries, medications and dental care that doctors – who support the association – provide to patients.”

Following the explosion, it is also working to repair damaged homes.

Amel is a not-for-profit organisation that provides health and psychological services, catering for refugees (many of whom live and work in Beirut) as well as Lebanese citizens. It runs several primary healthcare centres in Beirut and is collecting food and cash donations.