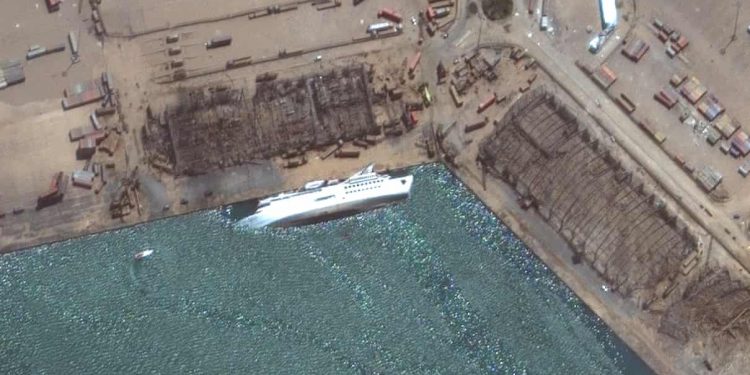 The Lebanese owner of a cruise ship sunk by the huge explosion that destroyed the port of Beirut is filing a lawsuit “all those responsible”, the country’s state news agency has said, as anger builds over the disaster.

Two crew members of the Orient Queen were killed and seven others wounded on Tuesday when a huge shipment of ammonium nitrate caught fire and caused an explosion that levelled the port and gutted entire swathes of the city.

Angry Lebanese plan a major protest in central Beirut on Saturday, amid scrutiny of how 2,750 tonnes of the dangerous material could have been stored so close to residential neighbourhoods for years – despite repeated warnings of the risk it posed.

A former port worker, Yusuf Shehadi, told the Guardian he had been instructed by the Lebanese military to house the chemicals in warehouse 12 at the port despite repeated protests by other government departments. Dozens of bags of fireworks were stored in the same hangar.

Shehadi said he had spoken to former colleagues at the port who said workers had been attempting to fix a gate outside warehouse 12 with an electrical tool ahead of the blast. “This was at 5pm, and after 30 minutes they saw smoke. Firefighters came, and so did state security. Everyone died.”

The country’s president, Michel Aoun, said the cause of the blast was still unclear and did not rule out the possibility of a hostile act.

The National News agency reported on Friday: “Entrepreneur Merhi Abou Merhi, the owner of the Orient Queen cruise ship, has filed a lawsuit against all those responsible for this catastrophic blast.”

The agency said the suit was the first of its kind and could pave the way for similar legal action in the coming days and weeks.

The large cruise ship, which can accomodate at least 300 guests and houses a casino, was docked in its home port when disaster struck.

The provisional death toll for the explosion is 154 but the figure is expected to rise since dozens of people are still reported missing and large numbers of injured are still hospitalised in critical condition. The explosion wounded at least 5,000 and caused unprecedented damage across the city.