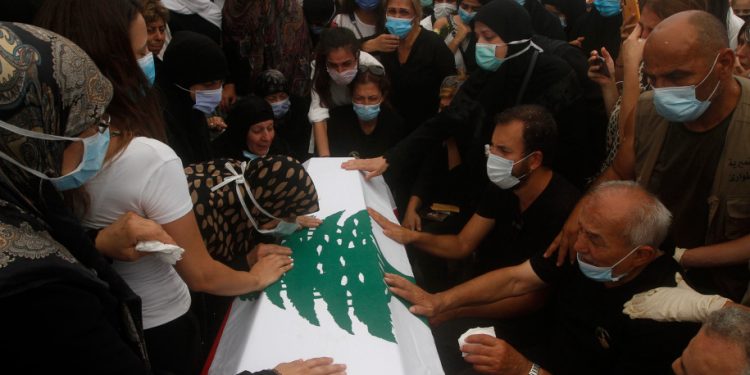 Beirut braced for another grim day Saturday, one filled with yet more mourning for those left dead by Lebanon’s deadliest explosion and a long-simmering anger that brought out tens of thousands to protest the government’s mishandling of the massive blast.

A stockpile of explosive chemicals is being blamed for Tuesday’s explosion, which killed more than 150, injured 5,000 and left 300,000 homeless.

The cache was being kept at a port in the capital city’s center despite at least 10 warnings over a half-dozen years from Lebanon’s customs, military, security agencies and judiciary, the Associated Press reported, citing government documents that surfaced on social media.

President Michel Aoun only learned of the 2,750 tons of ammonium nitrate three weeks ago, although he has been in office for four years. He told reporters he had acted immediately, ordering the military and security officials to do “what was needed.”

“Do you know how many problems have been accumulating?” Aoun replied, defending himself.

For millions in Lebanon, the blast showcased the failure of the country’s oppressive government to provide even something so basic as security. On Saturday, tens of thousands across the country were streaming into Beirut to show their disgust.

One sign for the march posted online read “Resign or hang” with an illustration of a cedar tree, Lebanon’s national emblem, on fire and two nooses, the Washington Post reported.

“We have no trust in our government,” university student Celine Dibo told Reuters earlier in the week as she mopped up blood at her apartment building. “I wish the United Nations would take over Lebanon.”

Earlier Saturday, the head of the Cairo-based Arab League, the European Union president and Turkey’s vice president arrived to show their solidarity with the tiny nation, Reuters reported.

The Arab League’s Ahmed Aboul Gheit told reporters that he would pull together Arab efforts to get supplies and manpower to Lebanon as well as assist in the investigation of the explosion.

Turkey, too, promised to step up by helping to rebuild the port of Beirut, Vice President Fuat Oktay told Reuters without giving details.

On Friday, the US quantified the amount of assistance that it is sending: $17 million.

The first wave of aid will include food, water and medical supplies and a team will “assist in the coordination and delivery of humanitarian assistance,” National security adviser Robert O’Brien said in a statement.