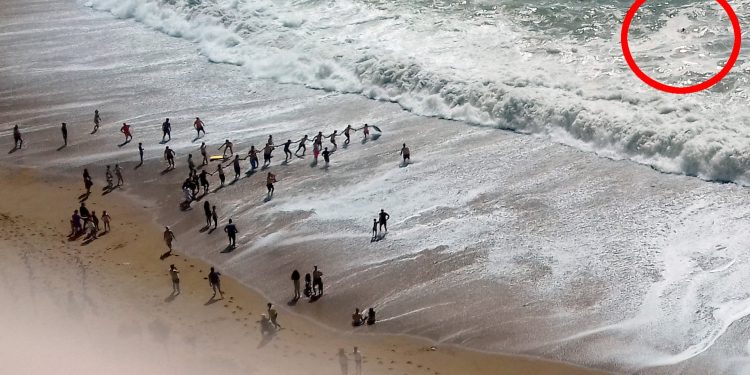 Witnesses have described the moment beachgoers formed a human chain to rescue a man in danger in the sea by the Durdle Door.

The incident happened on Thursday, as large waves crashed in around the popular tourist attraction on the Jurassic coast.

They described the man swimming in the sea and being pulled out away from the coastline. At first, they said, beachgoers were unsure whether or not he was waving or in trouble. But, when it became obvious it was the latter, beachgoers mounted their rescue by forming the human chain.

Jennie Bell, who was on holiday in the area with her family, said she had been worried from the moment they arrived because of the size and strength of the waves.

“One man went in and swam. He was towed along by the undercurrent across the beach but managed to swim back in with some effort. Then, some while later, I spotted another person in the water and, after a while, it became apparent to me and the other beachgoers that he couldn’t get back to shore.

“He was being towed along by the undercurrent. Everyone eventually was stood up watching what was happening. There was a man on the shoreline who was beckoning him in but he wasn’t able to get back to shore.

“Finally, we saw a group of people along the beach shouting to the person in the sea, to swim in on certain waves, this brought him closer but not enough to get out of the water.

“Then lots of people joined hands to form a chain leading directly into the water.”

Emily Foote was also on the beach. She said: “Because the sea was so strong it was literally just crashing into them so they were two or three people deep huddled together.

“They threw in a body board and what appeared to be a buoyancy aid … but both were blown back. One guy ran straight into the sea but wasn’t able to get near the man as … [it] was so strong.

“After what seemed an eternity the man got closer to him and then the rest of the people were able to pull him up the beach.”

According to Lulworth Coastguard rescue team both the first casualty and one of the rescuers had got into trouble in the water but each had been rescued and were able to walk away.

“With the large waves and spring tides of late, we strongly discourage sea swimming and playing around in the surf, especially on exposed beaches such as Durdle Door. The undertow is very powerful and will have no trouble taking you off your feet. If you see anyone in difficulty on the coast, call 999 and ask for the coastguard.”