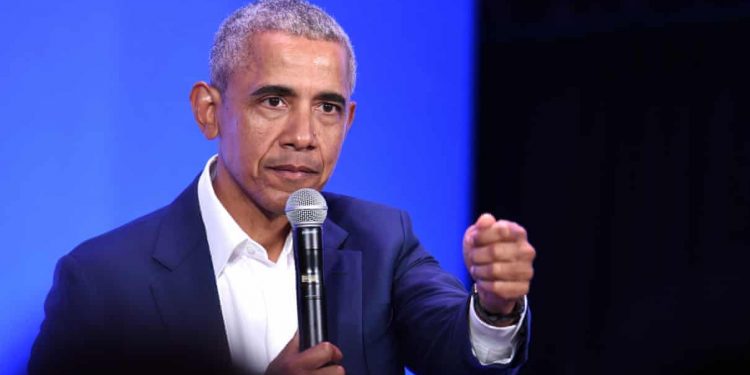 Barack Obama planned to warn on Wednesday night that “democracy itself is on the line” in the approaching presidential election contest between Donald Trump and Joe Biden, Obama’s former vice-president.

In a speech on the third night of the Democratic national convention, airing directly after Senator Kamala Harris was due to officially accept the party’s nomination to be vice-president, the former president was expected to attack Republican efforts to sabotage mail-in voting and ballot access.

“President Obama will highlight the cynical moves by the current administration and the Republican party to discourage Americans from voting,” a spokeswoman, Katie Hill, said in a statement before the speech. “He’ll make a pointed case that democracy itself is on the line – along with the chance to create a better version of it.”

Trump has for months been working to destroy faith in mail-in voting, which an unprecedented number of voters were expected to use in November owing to the coronavirus crisis, which has killed more than 170,000 Americans.

The Trump presidential campaign on Wednesday sued the state of New Jersey over a plan by the Democratic governor to mail a ballot to every household. The Trump campaign previously sued Nevada on similar grounds. While the cases have not been resolved, states have broad authority to set their own voting rules.

According to speech previews, Obama was prepared on Wednesday night to respond to the Trump campaign by amplifying what Democrats have long been saying: Trump does not want people to vote because he knows that if they are allowed to, he will lose.

In its third day, the Democratic convention, at which Biden was officially nominated as the party’s presidential candidate on Tuesday, was planned by organizers to build momentum with an increasing deployment of star power.

In addition to Obama and Harris, Senator Elizabeth Warren and the House speaker, Nancy Pelosi – both of whom have seen their popularity with Democrats rise over multiple rounds of public battle with Trump – were scheduled to speak late on Wednesday. Musical performances were expected from Billie Eilish and Jennifer Hudson.

And something of a tantalizing mystery surrounded the plans of another scheduled speaker, Hillary Clinton. It was unclear whether her anticipated digs at Trump would tacitly draw a contrast with a presidency that could have been: hers.

Clinton last week raised the alarm about the fragility of democracy after the postmaster general, a Trump mega-donor, announced cost-cutting operational changes to the US Postal Service (USPS), in a move critics said was an effort to rig the election.

After being called to testify by two congressional committees, the postmaster general, Louis DeJoy, announced on Tuesday that the operational changes would be delayed until after the November election.

While the Democratic convention’s virtual format, in which speakers address the all-online audience remotely from home studios across the country, has muted the impact of some speeches, a rousing address by former first lady Michelle Obama on Monday night showed the possibilities of the form.

Democrats were expectant about the return to the national stage of Barack Obama, the party’s premier get-out-the-vote cheerleader, in a contest where voter enthusiasm could be unusually important in navigating unpredictable election day dynamics.

In helping to drive record turnout for Democrats during the 2018 midterm elections, Obama frequently chastened crowds who jeered Trump administration misdeeds with a phrase he seemed sure to reprise on Wednesday: “Don’t boo. Vote.”

Obama remains a strongly popular figure among Americans, with 55% overall approval according to YouGov, versus 39% who approve of Trump.

The former president was also expected to speak about why he believes Biden has “the experience and character” to take the reins of the presidency, at a time when a historic majority of Americans say the country is headed in the wrong direction.

Biden and Obama have been seen as unusually close political allies. After running against Obama in the 2008 presidential primary, Biden agreed to join the ticket as vice-president on the condition that he would have Obama’s ear. Through the administration’s eight years, the two ate lunch together most days and Biden was seen as an unwaveringly faithful lieutenant.

After Biden was formally nominated at the convention on Wednesday night, Obama marked the news with a personal tweet.