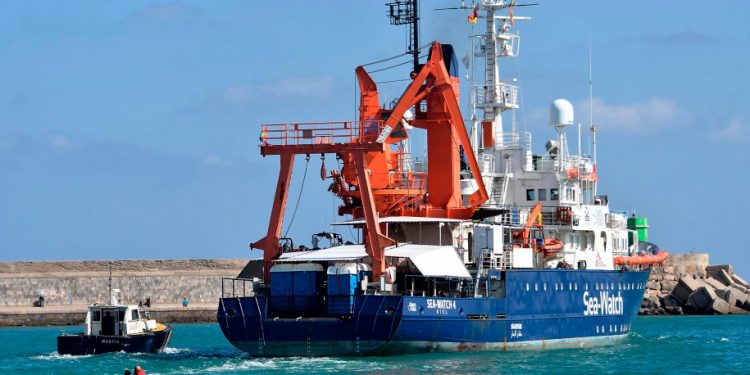 Banksy is taking to the sea with this latest work.

The elusive graffitist has financed a rescue boat to aid refugees attempting to reach Europe from North Africa, The Guardian reported on Thursday.

Named “Louise Michel” after a 19th-century French anarchist, the 100-foot motor yacht is splashed with bright pink paint and features a Banksy work of a girl in a life vest clutching a heart-shaped buoy.

It set sail in secrecy Aug. 18 from the Spanish seaport of Burriana and is now in the central Mediterranean. On Thursday, it rescued 89 people in distress, including 14 women and four children, according to the report.

The British guerrilla artist apparently got involved in the rescue mission back in September 2019, when he emailed Pia Klemp, the former captain of several NGO boats.

“Hello Pia, I’ve read about your story in the papers. You sound like a badass,” he wrote. “I am an artist from the UK and I’ve made some work about the migrant crisis, obviously I can’t keep the money. Could you use it to buy a new boat or something? Please let me know. Well done. Banksy.”

Klemp said she first thought it was a joke. She made it clear that Banksy’s involvement in the rescue missions is limited to providing funding.

The vessel’s crew is made up of 10 European activists with long experience in search and rescue operations.

The non-state sponsored rescue mission is the latest attempt by activist to prevent deaths in the Mediterranean.

So far in 2020, more than 500 refugees and migrants are known to have died in the body of water, and the real number is thought to be much higher. More than 19,500 migrants have survived the crossing this year and reached Italy or Malta.