Back to School and the Delta Variant 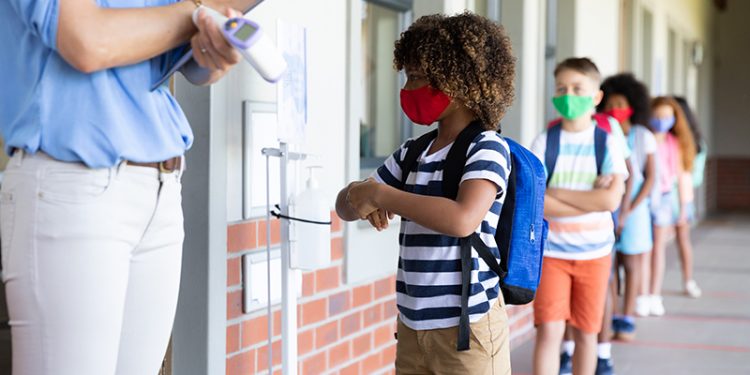 Multi ethnic group of school children wearing face masks, standing in line, having their temperature checked by a teacher. Education back to school health safety during Covid19 Coronavirus pandemic.

New York (Brussels Morning) At the time that Joseph Biden became President, the COVID-19 pandemic was still raging in the US. Millions of Americans were staying at home, thousands were dying of the disease every day, fear was still rampant and widespread vaccination seemed a very ambitious goal. Given that, what the Biden administration has accomplished in the last few months is genuinely impressive. The numbers of new cases and deaths are a fraction of what they were in January. Half of all Americans are fully vaccinated and another five or ten percent have received their first shot. While many continue to wear masks in stores and other indoor spaces, as well as on planes and public transportation, the country is no longer in any kind of lockdown.

The Biden administration has accomplished a lot in the fight against the pandemic, but they have one more major hurdle because, from a symbolic and policy perspective, there is no bigger COVID-related issue than making sure that K-12 education is taught in person and close to normal in the fall. If that does not happen, none of Biden’s impressive accomplishments regarding COVID will matter to voters.

Throughout the pandemic, the shutting of schools was a source of great concern and contention. Children struggled to learn online while missing out on valuable and fun interactions with their peers. Parents shared that frustration, watching their children struggle while being unable to focus on their own work because the schools were not open. Teachers and others who work in school expressed very reasonable fears about their own safety. The vaccines and the progress they made in fighting the virus made it seem likely that, by the coming school, year things will be different.

The spread of the Delta variant threatens that progress and in turn raises the chance that schools will not fully reopen in the fall.

Concerns about the Delta variant are increasing, as it appears that this variant can infect people who have already been vaccinated. These cases are rare, but they exist. Already, several states and localities have gone back to mask mandates of one form or another while even some Republican politicians have bucked the longstanding trend of COVID denial to urge their constituents to get vaccinated. One reason for this is that if the spread of the Delta variant continues and schools do not fully reopen in the fall, it is likely that Biden will see his popularity fall, but so will that of all elected governors, mayors and other incumbents regardless of party.

American parents will have little tolerance for another year, or even another few weeks in the fall, of remote learning, inconsistent school schedules and unclear messaging from local governments and school boards. That frustration is easy to understand, but it reflects a broader sense among the American people regarding future concessions to COVID.

There is little willingness anywhere in American society to go back to the restrictions of the high COVID period. As tens of millions of Americans got vaccinated in the spring and states and localities lifted bans on various activities, the American people breathed a sigh of relief and, rightly or not, understood COVID to be behind us. This feeling, as expected, can be found among that segment of the American population who never liked the restrictions, did not stay home, refused to wear masks and are vaccine-hesitant. However, it is increasingly widespread among those of us who did their best to stop the spread by following public health guidelines.

Many in the latter category believed that we did our part when the pandemic was at its worst, but that this current wave – I have lost track of what number it is – has largely been created by those who refuse to get a vaccine because of something they read on social media or encountered through rightwing propagandists like Tucker Carlson. Cutting back on activities to save the elderly, the most vulnerable and ourselves in the face of a genuine public health threat was one thing. Staying home in the middle of summer or not sending children to school in the fall because of the beliefs of a deeply deluded, uncaring, selfish and reactionary political party death cult hybrid is an entirely different issue.

This means that when Democratic chief executives, like Governor California Newsom of California and many big city mayors reimpose things like indoor mask mandates, they may encounter not just the normal noise and mouthing off from those who equate being asked to wear a mask while shopping with the crimes of the Nazis, but also pushback from the mask- wearing, pro-vaccine majority that is tired of seeing this recovery sabotaged by the far right, anti-science fringe.

School reopening, full and in person, is not just an important political goal for the President, but something that the American people need and want. It may be sabotaged, not by a virus but by the COVID-denying death cult that is today’s GOP. If that happens, it will only further divide an already deeply divided country.