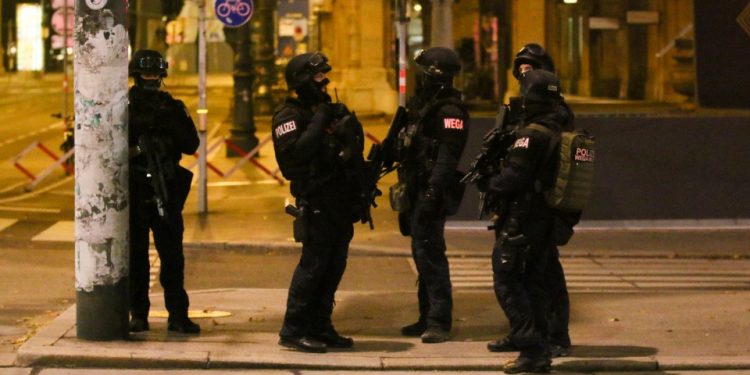 Brussels (Brussels Morning) Austrian police arrested 14 people on Tuesday over suspected involvement in the jihadist attack in Vienna on Monday that left four dead and 22 injured, Reuters reported Tuesday. The attacker, shot and killed by police minutes after the attack, was identified as Kujtim Fejzulai, who had been released from jail less than a year ago.

Fejzulai was serving a 22-month sentence for trying to travel to Syria to join the Islamic State of Iraq and the Levant (ISIL), but was released after serving eight months. Interior Minister Karl Nehammer pointed out that the attacker was released early because he gave the impression that he was deradicalised and prepared to integrate into the society. Commenting on the large volume of footage of the attacks provided by the public, Nehammer noted there was no indication of a second attacker, yet added that the possibility could not be ruled out.

Austria’s Chancellor Sebastian Kurz cautioned that the attack should not be seen as a conflict between Christians and Muslims or Austrians against immigrants, but, more accurately, as a fight between civilisation and barbarism.

Saudi Minister of Foreign Affairs Adel al-Jubeir stressed on Tuesday that the attack in Vienna was a heinous crime, contrary to all religious and human values.

US President Donald Trump called for an end to attacks against innocent people, adding that the US stands with European countries in the fight against terrorists, including radical Islamic terrorists.

Interior Minister Nehammer pointed out that the jihadist responsible for the attack in Vienna had managed to fool the de-radicalisation programme, having shown no warning signs of his radicalisation, RFI reported Tuesday. Despite every evidence of his desire to integrate into society, the attacker did the very opposite, Nehammer said.

It became evident that Fejzulai held radical ideas after his home was raided, when his Facebook postings of typical ISIL messages and photos were revealed. Nehammer noted that Vienna authorities had tried to strip the jihadist of his Austrian citizenship, but were unsuccessful given the lack of evidence at the time about his radicalisation.