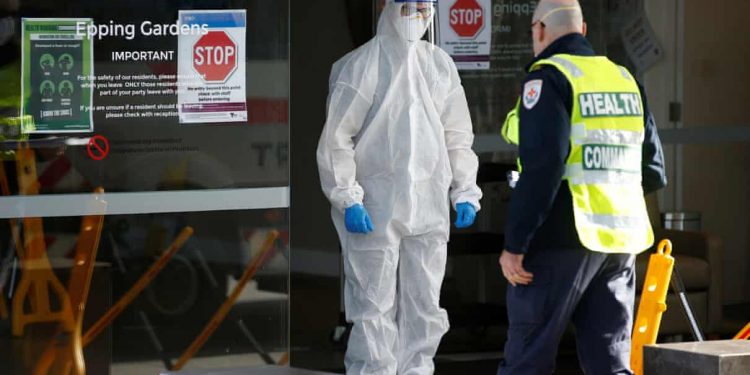 An aged care expert has told the royal commission examining the sector that Covid-19 is “the worst disaster that is still unfolding before my eyes”, and warned that hundreds of residents will die prematurely because of a failure of authorities to act.

Prof Joseph Ibrahim, head of the health law and ageing research unit at Monash University’s forensic medicine department, also told the aged care royal commission on Wednesday morning he believes Australia’s rate of death in residential aged care is more than 68% – the second-highest in the world behind Canada at 80%.

The royal commission heard there were several issues regarding aged care staffing – including that staff cuts had been ramped up during the pandemic, that more than 1000 aged care workers have so far contracted Covid-19, and that many workers were struggling to access personal protective equipment with some limited to using two face masks per shift.

Annie Butler, the federal secretary of the Australian Nursing & Midwifery Federation, told the commission a union survey showed aged care facilities had been ramping up staff cuts throughout the Covid-19 pandemic.

She said it took more than a month, and media attention, to be granted a meeting with the federal aged care minister, Richard Colbeck, to discuss the “astonishing” issue.

“There was supposed to be money dedicated specifically for increasing staffing and skills but there’s no accountability. There’s no checking of where that money has gone,” Butler said.

“We were told at the time we did our survey that some providers had cut staff from 1 March but over the last month or two, the feedback from members and even from employers directly, is that their cutting [of] staff has increased.”

Butler also said members had reported “incredible breaches of infection control”, with workers telling the union “they could only use one glove rather than two” to conserve PPE while others were “told to reuse equipment – put it in collective plastic bags”.

Michael Lye, a deputy secretary at the federal health department, told the royal commission that advice – outlined by a subcommittee of the commonwealth’s Australian Health Protection Principal Committee – to aged care providers to prepare for staff losses of 20%-30% during an outbreak were unrealistic.

Newmarch House head Grant Millard told the commission on Tuesday that 87% of staff were unable to work during its outbreak.

Ibrahim’s comments about the magnitude of the disaster came after the aged care royal commission earlier this week heard evidence of a “frustrating level of dysfunction” between state and federal health authorities over whether to send infected residents to hospital, and a failure of the federal government and aged care regulator to develop a specific Covid-19 response plan for the sector.

Dr Brendan Murphy, the Department of Health secretary, requested he be allowed to respond to the allegation the federal government failed to develop a Covid-19 response plan sector, but was shot down by the commissioners. Rozen subsequently noted Murphy had only been added to the hearing schedule at the request of the Commonwealth hours after the allegation of a lack of a plan was first heard.

“Anyone with a child at school would know that if you ask someone to self-assess themselves they’re either super confident and assess themselves as being fabulous or don’t know enough about their own problems to say that they’ve got gaps.

“The system is broken. And what we’ve seen with Covid is that the system is broken at a high level because it’s not the aged care workers that have failed us in this. It is our people who are in governance roles – and I’m not going to call them leaders because they’re not leading – the people in governance positions who are accountable for what happens is where we have failed.”

“They have not recognised the magnitude of the problem staring them in the face.”

Asked about the self-assessment process, ACQSC commissioner Janet Anderson said she wasn’t surprised that “there did seem to be a large degree of confidence that providers were ready in the event of a pandemic”. When asked why the self-assessments didn’t ask if a facility had a Covid-19 outbreak management plan, Anderson replied: “I don’t know.”

Ibrahim also said the so-called hospital in the home approach which aimed to keep residents in aged care facilities during outbreaks was “wrong and inappropriate”. He said the general health department document the government proffered as an aged care Covid-19 response was not specific in detailing action and only acknowledged that aged care was a high-risk area.

Ibrahim criticised “people in governance positions” within Australia’s aged care sector, and governments, for not recognising “the magnitude of the problem staring them in the face”and said the fact different federal and state government bodies and regulators hadn’t taken responsibility for aged care issues was causing confusion.

“The human misery and suffering must be acknowledged. This is the worst disaster that is still unfolding before my eyes and it’s the worst in my entire career,” Ibrahim said.

“In my opinion, hundreds of residents are, and will, die prematurely because people have failed to act. There’s a lack of empathy, a lack of urgency. There’s an attitude of futility which leads to an absence of action.”

Ibrahim said when he raised his concerns with governing authorities, both before and after the pandemic outbreak, he had received “comments saying that everything is under control, that I’m simply overreacting and causing panic”.

“We fail because we have treated residents as second-class citizens. There’s an absence of accountability. There still is and there is no consequences for failing to deliver good care in aged care.”

On the failure to develop an aged care Covid-19 response plan by government and the aged care regulator – claims since refuted by Colbeck and acting chief medical officer Prof Paul Kelly on Tuesday – Ibrahim said there had been an absence of “plan management that you teach to undergraduates”.

Referring to the Department of Health’s Australian Health Sector Emergency Response Plan for Novel Coronavirus, released in February, Ibrahim said: “I think any person reading it would see that it doesn’t do that. It’s Australia’s health sector emergency response. It’s not Australia’s aged care sector response, just in the title.

“This health sector emergency response plan does not address what needs to happen in aged care. It simply says aged care is a high-risk area. There’s fundamentally no gap analysis to prepare us. And that’s the first step in, I guess, any situation around a problem. You know, what are the strengths, what are the weaknesses, where are the gaps? It’s not there.”

“I’m surprised that the minister [Colbeck] is relying purely on public health specialists and infection disease specialists to manage aged care when the department and the minister know full well the circumstances in aged care are quite different.”

Carolyn Smith, WA state secretary of the United Workers Union, said government guidance and policies for aged care during the pandemic were developed without consulting workers to understand their needs and infection risks.

“The absolute lack of involvement and communication with care staff who are doing the majority of work in the facilities, I think is negligent to the extreme,” she said.

When Diana Asmar, the secretary of the Health Workers Union, told the royal commission union members in the sector were struggling to get personal protective equipment including masks, and that some were making do according to an “appalling” two mask per shift guideline, commissioner Lynelle Briggs responded: “oh god”.

Asmar earlier said the union believed more than 1000 workers – including carers, kitchen staff, cleaners and clerical workers in aged care – had contracted Covid-19, based on calls the union had received and made to facilities experiencing outbreaks.

“Our members right now feel like they’re on the bottom of the Titanic ship,” she said.