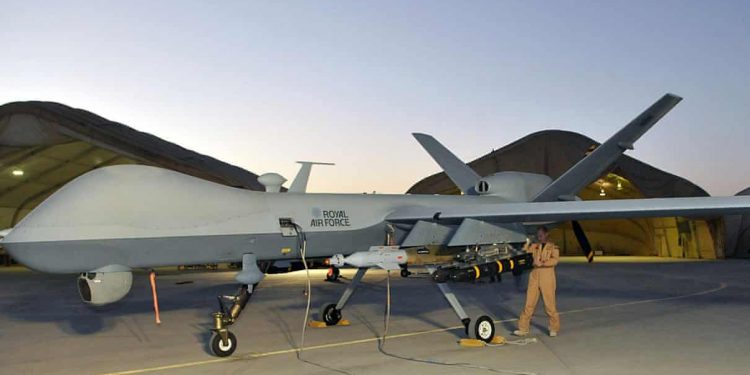 Australian airforce pilots and private contractors are being drafted in to help fly UK armed Reaper drones over Syria and Iraq amid shortages in RAF crew and concern over the stresses of piloting deadly unmanned aircraft.

Their presence allows the RAF to deploy its trained pilots more efficiently on combat missions and helps plug the crew shortages that are deemed to be the greatest risk to the UK’s £1.1bn future drone programme.

Insiders have acknowledged that the stresses of flying combat missions remotely from the RAF Waddington base in Lincolnshire have been underestimated, while pilots often prefer to fly in fighter jets rather than spend hours in an airbase.

In January, Sir Stephen Lovegrove, the Ministry of Defence (MoD) permanent secretary, admitted in a letter to the Public Accounts Committee that training and retaining drone crews “has historically proved challenging”.

The contractors are supplied by the Reaper’s manufacturer, US drone giant General Atomics, to take off and land the drones. Military sources said they are banned from firing missiles as they operate in the Middle East, with the drones believed to be piloted from the Ali al Salem base in Kuwait.

The Australian airforce crews – whose numbers the MoD will not confirm – will be deployed to help get the pilots experience in flying Reaper drones ahead of the country’s own future use of the unmanned craft.

Details of the deployment were first uncovered in official documents by Drone Wars, a specialist drone research group, which said they raised “important legal and accountability issues” at a time when the UK is expanding its drone fleet from the 9 Reapers to 16 Protectors, all supplied by General Atomics.

Chris Coles, director of Drone Wars, said: “Introducing private contractors into flying combat missions, even in a limited way, is dangerous and short-sighted and should be ended immediately.”

Reaper drones have been intensively used in the near six-year war against Isis in Iraq and Syria, firing a quarter of all missiles, and accounted for nearly half of the mission hours flown, demonstrating the demands placed on crews. After a six-month hiatus where no weapons were fired, there were 32 Reaper and fighter jet strikes between April and June this year.

Details of the extra pilots were spelled out in an addendum to the annual report of the Infrastructure and Projects Authority which monitors major government projects, in a section on the next generation Protector drone due to come into service in 2024.

Pilot shortages had previously put the risk to the Protector programme on an “amber/red” alert, but the emergency recruitment of the contractors and the Australian pilots had helped reduce the risks to amber.

“A steady increase in overall Reaper Force crew numbers has also improved confidence,” the annex to the document noted. “This has been brought about by improved retention; Royal Australian Air Force exchange officers; and a pathway to using contractors to relieve Royal Air Force personnel at the deployed location.”

The note to the report concluded that “this gave more confidence that the 45 Reaper crews needed for Transition to Protector would be achieved by end 2020”.

An RAF spokesperson said: “Fully trained and security cleared contractors are being used to launch and recover UK Reaper aircraft, however, it is highly trained Royal Air Force aircrew who continue to control the operational mission and weapons.”