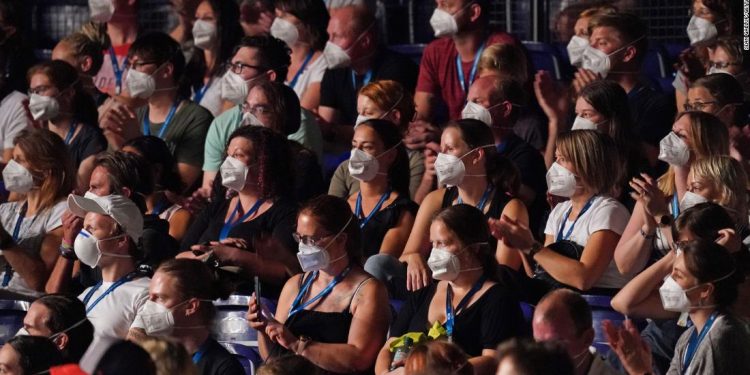 Scientists in Germany put on three pop concerts to study the risks of coronavirus infections in large indoor spaces.

The three shows were staged Saturday in the eastern city of Leipzig.

According to German broadcaster DW News, singer Tim Bendzko volunteered to play all three concerts over the course of the day, to help create a more realistic reaction from the crowd.

“We really had a lot of fun,” Bendzko said, according to The Associated Press. “We survived drive-in concerts this summer and in that respect, for us, this is a first step toward normalcy.”

The experiment, named Restart-19, was a scientific study carried out by the University Medical Center in Halle.

Each show was designed to test a different configuration of the event.

One show simulated pre-pandemic conditions; the second added some distance between participants and featured an “optimized hygiene concept,” according to researchers.

For the last scenario, concertgoers were asked to maintain 1.5 meters (5 feet) of distance between one another.

Participants, who were all healthy and aged between 18 and 50, were asked to wear a face mask throughout the day. They were also equipped with contact tracers, so researchers could record their movement in the packed arena.

Fluorescent disinfectants were used to highlight the surfaces that were touched most frequently by audience.

Although the project hoped to enlist 4,000 volunteers, only about a third signed up.

That’s partially because people are still away for the summer in Germany — and also partially due to fears of taking part in such a large event, according to Stefan Moritz, the experiment’s coordinator.

But Moritz, who’s the head of clinical infectious diseases at the university hospital in Halle, added that researchers are “satisfied with the numbers.”

“We have good data quality,” he told reporters.

The results of the study are expected in four to six weeks, he said.