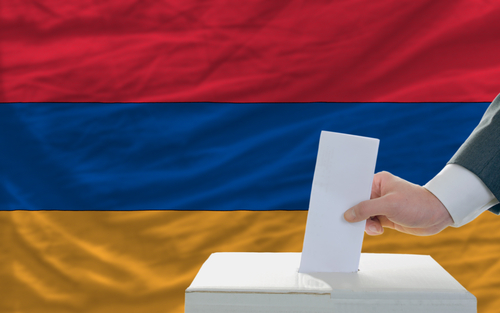 Pashinyan announced his decision after Monday’s protests and counter-protests during which his critics stormed the government building, chanting for his resignation. Meanwhile his own supporters gathered in the main city square in Yerevan.

“Let’s go to the polls and see whose resignation the people are demanding,” Pashinyan declaimed to thousands of his supporters, after months of refusing to step down, despite constant calls to do so from the opposition, and even the military.

Pashinyan accused the military of attempting a coup, and demanded that President Armen Sarkissian remove the army’s top general, but Sarkissian declined to do so on Monday, declaring such a move would be unconstitutional.

The Prime Minister was the target of widespread criticism for signing the Russian-brokered peace deal after six weeks of fighting over the Nagorno-Karabakh, where ethnic Armenians battled against Azerbaijani Azeri forces.

The Azezbaijani exclave was under the de facto control of Armenians before the outbreak of fighting. The military and many Armenians believe Pashinyan’s handling of the conflict was atrocious. Pashinyan admitted to making mistakes, but until Monday refused to as much as answer the calls to step down. Having changed his mind, he told his followers that “only the people can decide who will remain in power”.