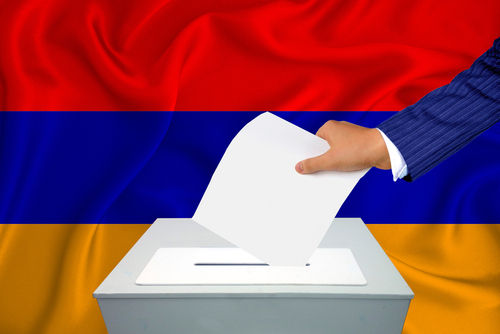 Brussels (Brussels Morning) Armenia’s Prime Minister Nikol Pashinyan emerged the winner in a snap election he called to defuse the public tensions over the peace deal he signed with Azerbaijan after six weeks of fighting in the Nagorno-Karabakh region.

Pashinyan’s Civil Contract party won 53.9% of the vote, securing a stable majority likely to keep the pro-Western politician in power. An opposition bloc led by former President Robert Kocharyan came a distant second, with some 21% of the vote.

Kocharyan’s bloc declared itself a victim of electoral fraud and stated it would refuse to recognise the results until authorities study alleged “hundreds of violations” the bloc claims to have occurred all over the polling stations in the country.

Pashinyan faced public protests and calls for resignation from his opponents after the conclusion of the 2020 Nagorno-Karabakh conflict, in which Azerbaijan, supported by Turkey, attempted to take control of an Armenian enclave within the Azerbaijani territory.

The six-week war ended in November with a Moscow-sponsored truce which ceded parts of Armenian-controlled territory to Baku, in a five-year arrangement to be monitored and enforced by some 2,000 Russian peacekeeping troops. Pashinyan defended his decision to sign the truce by claiming he wanted to prevent further losses of lives and territory in a conflict which was going badly for Armenia.

The truce was widely regarded within Armenia as a national humiliation, with the opposition jumping on the opportunity to put the blame solely on Pashinyan’s shoulders. Public protests against Pashinyan culminated in February this year, as opposition demanded his resignation, and was joined in turn by the Armenian army, which accused him of ineffective management and “serious mistakes in foreign policy”.

Their demandsfor his resignation prompted Pashinyan to accuse the military of attempting a coup against the democratically-elected government, encouraging on his supporters to rally behind him as he called a snap election to resolve the crisis in the country.