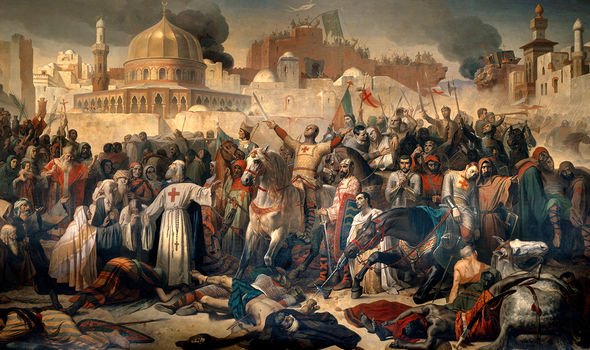 ARCHAEOLOGISTS discovered the remains of what they believed to be a Crusader-era ship which appears to provide evidence of a dramatic escape attempt during a struggle for the Biblical Holy Land.

The Crusades were a series of religious wars in the medieval period, including the Eastern Mediterranean campaigns between 1096 and 1271 that had the objective of recovering the Land of the Gospels. Beginning with the First Crusade, Christian armies spent some two centuries travelling back and forth between Europe and the Middle East, where they fought for control. Jerusalem, of course, was central to the struggle, and the Crusaders captured the city in 1099 but lost it again in 1187.

At that point, the Crusaders moved the heart of their kingdom to Acre, located on Israel’s northern coast.

But by the spring of 1291, an Egyptian sultan, Al-Ashraf Khalil, moved in with 100,000 cavalry and foot soldiers to banish the Crusaders from the Holy Land.

Incredibly, marine archaeologists discovered the remains of treasure-laden Crusader ship which they believe was used to try to flee Acre when forces stormed the city.

The wood on the ship was carbon dated to between 1062 and 1250, but among the keel and planks that remain the archaeologists also discovered 30 gold coins.

These coins are the key to linking the wreck to the fleeing Crusaders, according to Dr Ehud Galili and Professor Michal Artzy from Haifa University.

Robert Kool of Israel Antiquities Authority identified the coins as “florins,” which were minted in Florence beginning in 1252.

Historical eyewitnesses from the Siege of Acre recorded that nobles and merchants would use such valuables to bribe boat owners in the hope of buying their escape.

Among the wreckage, archaeologists also found ceramic bowls and jugs from places like southern Italy, Syria, and Cyprus, Israeli newspaper Haaretz reported in 2017.

According to theories, a desperate standoff then developed at the castle of the Templars in the northwestern part of the city.

The barricaded knights fought valiantly for several days, but their defence was undermined by enemies digging underneath their stronghold.

The foundation of the castle suddenly collapsed burying the knights forever.

Fearing the crusaders’ return, the harbour and the city were destroyed, leaving the port in a pile of rubble for hundreds of years.

In the 16th century, forces of the Ottoman Empire captured Acre.

They rebuilt the city entirely and constructed a wall around it.

In 2011, archaeologists unveiled the Crusader city of Acre, remarkably intact, beneath the Ottoman-era town.

After studying 17th-century maps of Acre, the archaeologists decided to search in the southeastern parts of the “wall-less” city and began excavating in between buildings on open plots near a Muslim cemetery and an abandoned bakery.

In their very first digging season, they found the floor level of collapsed Crusader buildings, covered in a layer of black ashy deposits 30cm thick.

Professor Adrian Boas who co-directed the excavations together with Georg Philipp Meloni of the Deutsche Orden, said: “We found the destruction layer of 1291.”