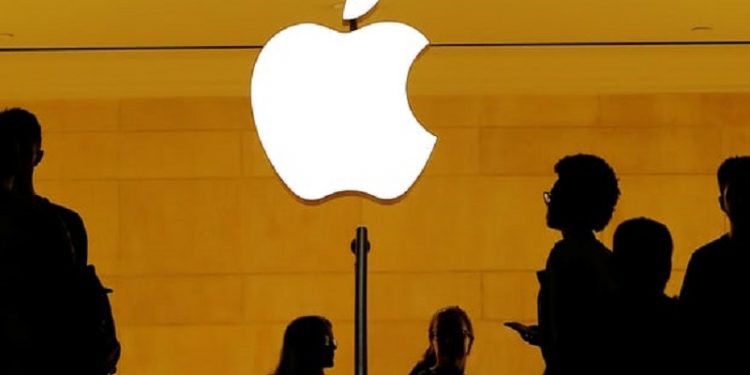 Apple has become a $2tn company, only two years after becoming the first company to be valued at $1tn by Wall Street.

The technology powerhouse behind the iPhone needed to hit a share price of $467.77 to reach the milestone and moved through that barrier during mid-morning trading on the Nasdaq exchange on Wednesday.

The $2tn (£1.52tn) valuation means the company, co-founded to sell personal computers by the late Steve Jobs in 1976, is valued at significantly more than half of the US’s total tax take of 2019.

It is not the first company in the world to be valued at $2tn. Saudi Aramco was briefly valued at that level after the Saudi state-backed oil company made its stock market debut last year, but it then slipped back.

The iMac to iPhone maker has so far proved to be coronavirus-proof, crushing Wall Street expectations in each of the last two quarters and propelling the company to its historic milestone.

Apple had expected to take a hit, issuing a revenue warning and withdrawing financial guidance in February well before the pandemic had gone global. Instead, Apple’s share price has risen more than 50% this year, adding more than $1tn to its value since March. It is now worth $300bn than the next largest listed-US company, Jeff Bezos’ Amazon.

However, the company’s rise to tech behemoth status has seen its carefully cultivated image as the plucky challenger replaced by accusations it is now abusing its power.

The Apple juggernaut has successfully navigated major changes in recent years as Jony Ive, the British chief architect of groundbreaking designs from the iMac to the iPhone who reinvigorated the business alongside Jobs, left the company after almost 30 years last year.

Jobs passed away in 2011 and his successor, Apple lifer Tim Cook, has bet big on moving the company away from an over dependence on its stalwart product, the iPhone.

Cook has presided over an almost nine-fold increase in Apple’s share price since taking over, a run that saw the 59-year-old join the billionaire club last week.

It has been Apple’s push into services and so-called wearable products that has really paid off, making more than $13bn in the last quarter alone. The company has moved into Spotify territory with its subscription music offering, Apple Music.

Last year, the company even launched a credit card, and its contactless payment system Apple Pay, from which it takes 15 cents from every $100 spent, is used by more than 400 million people.

The company’s wearables division, home to the Apple Watch and Airpod wireless earphones, has rapidly grown to be worth more than the iPad in annual sales revenue. An estimated 550 million consumers now pay regularly for an Apple service. Two years ago the iPhone accounted for more than half of Apple’s revenues, that is now down to just over 40%.

“The last few months have underlined the importance for users and households to own better quality devices, connections and services,” said Paolo Pescatore, media analyst at PP Foresight. “And with a strong, broad portfolio of devices and a growing services offering, there are plentiful opportunities for future growth.”

The company’s success has gone hand in hand with controversy that has at times tarnished its image. Apple has been criticised for its attitude toward payment of corporation tax and the labour conditions faced by the factory workers who make the products it sells to wealthy consumers.

Apple was co-founded in 1976 by Jobs, Ronald Wayne and Steve Wozniak, who is credited with designing and building the company’s first desktop computer, the Apple I, which sold for $666.66.

Despite being a leader of the personal computing revolution, Jobs resigned from the company in 1985 after falling out with then chief executive John Sculley.

Jobs returned to the fold 12 years later, when Apple paid $427m to acquire workstation computer company NeXT, which Jobs had founded. He was soon installed as chief executive, tasked with reviving the flagging company’s fortunes as rivals led by Bill Gates’ Microsoft ate into its market share.

The partnership between Jobs and Ive resulted in the invention of disruptive products such as the iPod in 2001 and the iPhone in 2007, which became style and cultural icons as well as technologically breaking new ground. More than 1.2bn iPhones have been sold.