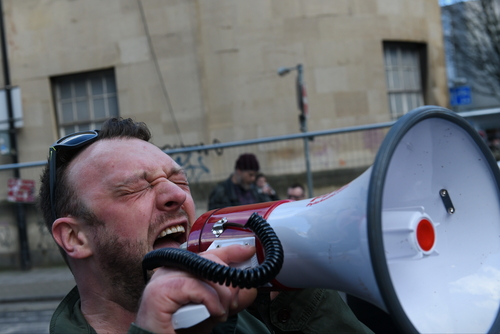 Brussels (Brussels Morning) Massive protests against a law which would impose limits on future protests turned violent in Bristol, with two officers requiring medical attention after a small minority turned what started out as a peaceful rally into a scene of violent disorder, Reuters reports.

Thousands of residents gathered in Bristol city centre late Sunday to protest against the bill that would secure new powers for the police to limit future protests in the UK. According to local police, the protest started peacefully, until a small number of protesters resorted to violence, escalating the protest into clashes with the police.

Two officers were injured when protesters fired fireworks at the police, tried to knock over a police van, attempted to scale the wall of the police station, and sprayed graffiti on the building. Two police vehicles were set on fire, while police in full riot gear attempted to repel the protesters using batons and shields.

The protests started in opposition to the proposed Police, Crime, Sentencing and Courts bill, which would introduce jail sentences of up to ten years for protests causing “annoyance” – a discretionary term left to the police authorities to determine, who would be free to set time and noise limits on street protests.

The bill, which passed the first hurdle in the House of Commons last week, would also extend the area around Parliament in which protests are banned. Labour MPs opposing the bill, claimed it represents a slide into authoritarianism, and described it as a “Tory-led coup without guns”.

Sunday’s protesters carried placards with slogans expressing similar concerns, such as “Kill the Bill”, “The Day Democracy Became Dictatorship”, and “We Can’t Be Silenced That Easy”.

Home Secretary Priti Patel called the scenes from the Bristol protest “unacceptable”. “Thuggery and disorder by a minority will never be tolerated,” Patel declared. “Our police officers put themselves in harm’s way to protect us all”, she said, adding that her thoughts were with those police officers who had been injured.