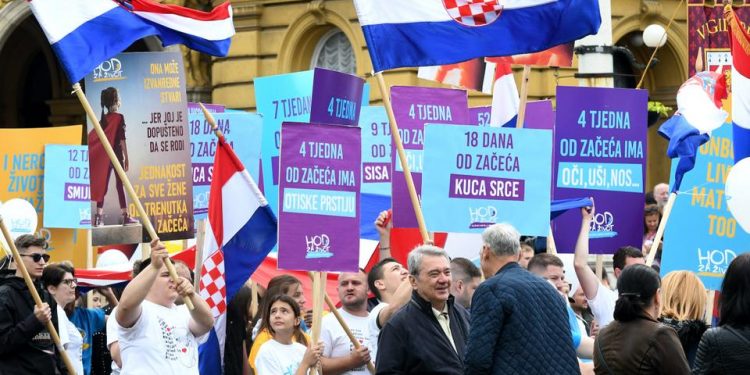 Brussels (Brussels Morning) Thousands of people joined the anti-abortion “Walk for Life” in Croatia’s capital Zagreb on Saturday, a day ahead of the key second round of local elections. In the process, they flouted the “electoral silence” law that forbids campaigning on election eve by singing and playing songs identified with one of the candidates.

Croatian laws mandate a ban on all political messaging, reporting and advertising starting at midnight the day before elections, and ending when the polls close, 43 hours later.

However, ultra-conservative groups started holding anti-abortion protests on electoral silence day at the 2019 presidential elections. Since the State Electoral Commission (DIP) appointed by the centre-right Croatian Democratic Union (HDZ) government found it was not in breach of electoral silence provisions, a similar protest was held in 2020 the day before parliamentary elections.

Political analysts warn the protests are overtly political, with their message favouring conservative and far-right political options, and often featuring right-wing politicians in the crowds.

Saturday’s protests were even more direct, as the organisers played songs by the Homeland Movement (DP) leader Miroslav Škoro, a popular singer of patriotic songs and a candidate in Sunday’s mayoral elections in Zagreb. They also played songs by notorious Marko Perković Thompson, a far-right singer whose concerts have been banned in a number of EU countries, who has openly endorsed Škoro for mayor of Zagreb.

Abortion remains legal in the newest EU member state, but the conservative and clerical right is lobbying hard to restrict the practice. A growing number of doctors are invoking the right of conscientious objection and refusing to perform abortions, making access to abortion difficult for many women.

Leaked draft versions of the yet unfinished abortion bill, which is set to replace the secular Yugoslav-era law, featured a number of provisions that appeared to  be concessions to the Catholic Church in Croatia. One such requires women considering abortion to consult with their “spiritual adviser” before committing to the procedure.