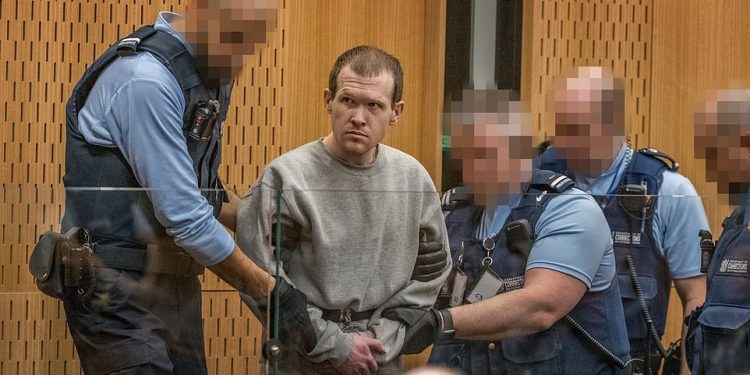 “Good afternoon to everyone except you,” Wasseim Alsati Daragmih told the terrorist. There was a ripple of laughter in the courtroom and a smile from the Australian man who had shot him.

It was the afternoon of the second day of sentencing for the man who stormed two mosques in Christchurch, New Zealand in March 2019, killing 51 people and wounding dozens more – including Darragmih.

He was shot multiple times at Al Noor mosque, the first the gunman struck. A judge will decide this week whether Brenton Tarrant, 29, will ever leave jail, after he planned the attacks on the places of worship for two years, amassed a cache of semiautomatic weapons, and visited two mosques, indiscriminately murdering Muslims at prayer.

“Thankfully, [I have] survived because he don’t know how to use a gun,” Darragmih said. That drew a laugh from the terrorist.

Tarrant, a self-professed white supremacist who broadcast part of his massacre live on Facebook, in March abruptly pleaded guilty to all the charges he faces, and sacked his lawyers in July, electing to defend himself. The process, for his victims and their families, of standing just metres from the man who destroyed bodies, hopes and aspirations, who sits in a grey prison tracksuit behind a pane of glass – is a strange one.

The gunman returns eye contact when offered and occasionally nods in response to what his victims tell him. He appears pale, thin and quiet. On a couple of occasions, when addressed directly, he has looked quickly upwards, blinking rapidly.

The emotion fills the room to breaking point and sometimes bursts: each person spending five or 10 minutes pouring out the ways their lives have been changed by Tarrant’s actions. Each is a story of devastating loss – a “cumulative impact”, one woman told the court on Tuesday, that was “impossible to describe”.

“I held a three-year-old boy in my arms praying that he was still alive,” said Nathan Smith, a worshiper at Al Noor mosque. “He was not.”

Mucaad Ibrahim, 3, was shot twice by “precisely aimed shots” while he clung to his father’s legs, said an official summary of events, read in court on Monday.

For some, the sight of the gunman in court had led them to tear up their planned remarks.

Mirwais Waziri, who arrived in New Zealand as a refugee from Afghanistan 17 years ago and survived the shooting at Al Noor, said that when the police statement describing Tarrant’s actions had been read in court, the gunman had not showed “any remorse, any regret, any shame”.

“So I decided not to read my victim statement showing how much I suffer.”

Instead he said Tarrant was “the loser, and we are the winners”. As an Afghan, he had been called a terrorist in New Zealand before.

“You took that name from me,” Waziri told the gunman. “Today, you are called terrorist.”

Terrorism did not possess “religion, race or colour”, he said, to applause from other victims and their families in the public gallery. “You have proved to the world that I, as a Muslim, and us, we are not terrorists.”

Before the attacks, Waziri said he had been thinking about leaving New Zealand, but now he was not going anywhere. He took his seat to more applause in a courtroom that has been emotional at times but otherwise quiet and calm.

Elsewhere, too, Tarrant felt the force of families’ anger as well as their grief.

“Nobody wants you buddy,” said Farisha Razak, whose father Ashraf Ali Razak was killed in the attacks. The gunman had been rejected by his country, Australia, his parents and his friends, she added.

“We Muslims are not bad people, get it in your thick head,” said Razak. “We are the first people to help anyone or make somebody’s day.”

Some referred to the gunman’s anti-Islamic political views.

“You killed in my name,” Nathan Smith, who was not shot in the attacks, told Tarrant. “I am white, Muslim and proud … All you have done is caused great shame for Europeans all around the world.”

Since the attack, Smith said, he had not slept well and did not trust people.

“At times I think about your parents … they are also victims, they have lost their son,” he said. “But you had a choice; my brother and sisters didn’t … I will never forgive you.”

On Wednesday, prosecutors and Tarrant will have the opportunity to make submissions about the proposed length of his sentence, with fears the moment could be used to air his extremist views. His sentence is expected to be announced on Thursday; many of the victims have requested that Justice Cameron Mander, the presiding judge, make the first ruling in New Zealand – under current laws – of life in jail with no chance of parole.

As Darragmih, a young father with a wide smile and dark curly hair, wrapped up his remarks to the court on Tuesday, he said the other man had “not succeeded” in his aims.

“You have made us come together,” he said. “Your heart has led you to such a lonely, a very lonely and miserable place where you deserve to go.”

Darragmih said he had come to court “to honour everyone except you and to laugh that he’s sitting in the dock”.

“And me enjoying my freedom,” he added. “That’s where you deserve to be.”