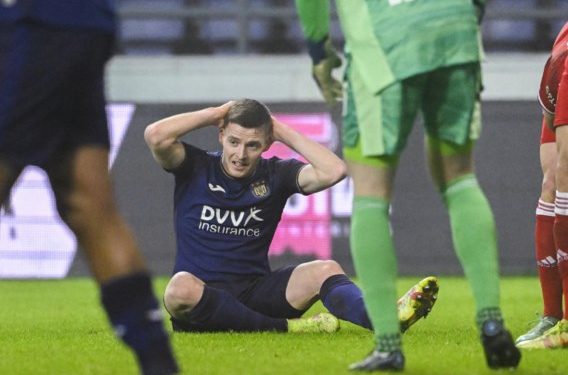 Belgium, (Brussels Morning) – Anderlecht still missed out on the win in the Clasico against Standard. The Purple & White seemed to be on their way to a narrow victory for a long time after a goal by Verschaeren in the first half. Standard striker Dragus was offered the equalizer just like that after a terrible pass from Gomez, and finished mercilessly: 1-1.

The Purple & White simply throws two points in the garbage and gets stuck in fourth place.

The opening quarter was rather hesitant. More than one shot from Verschaeren, which went far wide, was not to be noted. Anderlecht, where Raman started surprisingly on the bench and Amuzu took the place of Kouamé who is in the Africa Cup, was the most threatening team. After 25 minutes, Standard, where newcomers Dewaele, Cafaro and Emond immediately kicked off, out of the blue – it had 22 percent possession at the time – was just as dangerous. First Muleka’s shot didn’t go too far, then Magallan – again he – blundered by putting the ball in front of his own goal. Muleka failed to take advantage of it.

The Purple & White soon took over again. Verschaeren, who moved from the right flank to the striker, aimed very narrowly: the leather skimmed the post. It was not long after that. After a great attack in which Refaelov and Zirkzee advanced very quickly, it was Verschaeren who pushed the 1-0 past goalkeeper Bodart without hesitation. The visitors, meanwhile, kept trying. Donnum curled a ball over a yard.

With the break in sight, Anderlecht went looking for a second goal. Refaelov started from just outside the box with a shot across the ground, but Bodart was good and could pick up. It was not a good first half. The Purple & White was better, but did relatively little with it and mostly tapped around without too much momentum.

After the break, the game pattern of the first half continued: the pace was rather low, Anderlecht were in charge, but without creating a lot of concrete goal danger. After ten minutes, Refaelov asked for a penalty kick for pulling the jersey from Dussenne, but it was a bit light to whistle for.

On the hour Vincent Kompany brought Raman, who replaced Amuzu. It was fellow striker Zirkzee who stepped on Bodart moments later and then went for a walk through the Liège defence, but wanted to do it a little too well and got stuck. You may be wondering where Standard has been in the meantime? nowhere. The Rouches played a crappy second half. They are in the relegation zone for a reason.

Anderlecht kept procrastinating with killing the match. Fifteen minutes before the end, Raman had a good chance to make it 2-0, but he hesitated too long and let his moment slip away. It’s called playing with fire, and the Purple & White got the lid on the nose for that. In the end, Gomez suffered a stupid loss of possession. Substitute Dragus unexpectedly kicked an open goal and gave Standard a point that it hadn’t claimed for a moment. The Purple & White just threw away the victory.