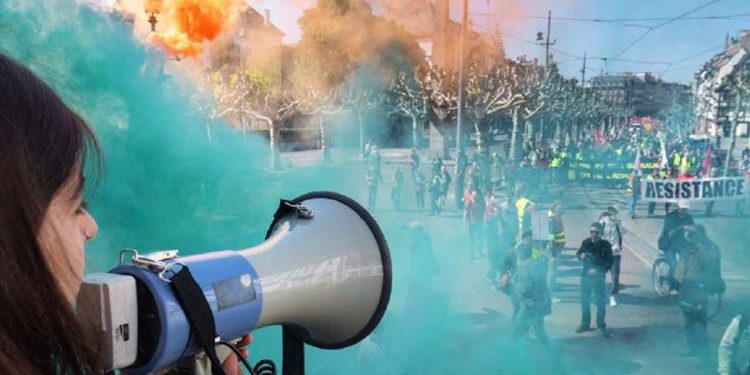 Amnesty pointed out that France has targeted thousands of peaceful protesters over the last three years and that the situation has taken a turn for the worse with the introduction of the coronavirus restrictions. The human rights NGO warned that the blanket ban on protests following the coronavirus lockdown was disproportionate and had resulted in hundreds of unjustified fines.

According to Amnesty, medics, journalists and human rights observers were targeted under vague laws during nationwide protests that began in late 2018, with more than 40,000 convictions in 2018 and 2019. The NGO cites regulations against contempt of public officials as an example of what it means by vague laws. It claims that French authorities have unleashed a legislative arsenal to arrest and prosecute protesters arbitrarily and to unduly restrict their right to freedom of assembly.

France has seen almost weekly anti-government protests by the Yellow Vests movement since late 2018 because of a decline in spending power and perceptions of social inequality.

Marco Perolini of Amnesty International acknowledged that violent demonstrations are a matter of legitimate concern. However, he warned that there is political motive to make examples of peaceful protesters and deter others from joining protests. He said It was sad that a country with such a long and proud tradition of protest as an agent for social change should criminalise protests in this manner. Perolini noted how, three years after France’s President Emmanuel Macron made the election promise to protect the right to peacefully assemble, peaceful protests were now under unprecedented attack.

Amnesty condemned protesters who commit violence or arson but stressed that French authorities have weaponised criminal law. The NGO claimed yet again that France had imposed disproportionate restrictions on public assemblies in the name of social distancing measures aimed at curbing the spread of the coronavirus.

The NGO proposed an urgent revision of the ban on face coverings at protests and of all laws that infringe on the right of peaceful assembly. It also called for an end to the abusive use of identity verification laws by police. Amnesty demanded that French authorities should allow media and NGOs to access and cover protests as well as form an independent body to investigate complaints against police.