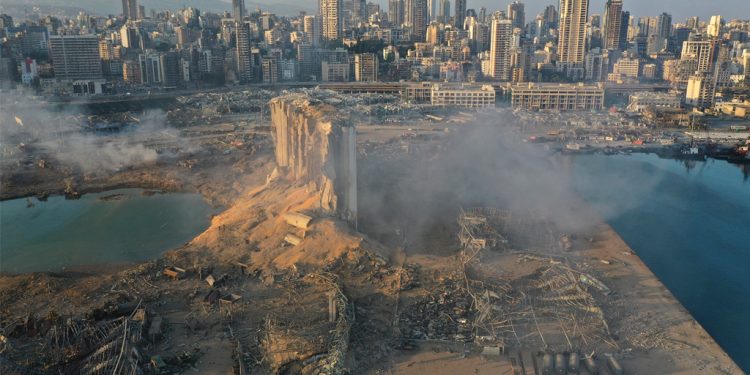 The likely cause of the huge blast in Beirut on Tuesday appears to have been the highly reactive chemical ammonium nitrate.

Lebanon’s prime minister, Hassan Diab, said 2,700 tonnes of ammonium nitrate exploded after lying unsecured in a warehouse for six years, tallying with reports that a ship carrying a similar quantity of the chemical had unloaded its cargo at the port in 2013. It remains unclear what caused the chemical to ignite.

Ammonium nitrate is a common industrial chemical used mainly for fertiliser because it is a good source of nitrogen for plants. It is also one of the main components in mining explosives.

It is not explosive on its own, rather it is an oxidiser, drawing oxygen to a fire – and therefore making it much more intense, according to Gabriel da Silva, a senior lecturer in chemical engineering at the University of Melbourne.

However, da Silva said, it ignites only under the right circumstances, and these are difficult to achieve. “You need extreme circumstances to set off an explosion,” he said.

While ammonium nitrate can in fact put out a fire, if the chemical itself is contaminated, for example with oil, it becomes highly explosive. “I think that’s what’s happened here,” said da Silva.

While the chemicals in the air should dissipate fairly quickly, lingering pollutants can cause problems later, for example if they acidify rain.

“If you look at the smoke that came from the blast it’s this kind of blood red colour. That’s because of the nitrogen oxide air pollutants in it,” he said.

The images coming out of Beirut are also horribly reminiscent of the destruction inflicted on the Chinese city of Tianjin by a 2015 warehouse disaster that killed more than 170 people and left hundreds injured.

On the night of 12 August a series of cataclysmic detonations rocked an area of warehouses where large quantities of hazardous chemicals, also including sodium cyanide and potassium nitrate, were being stored, in some cases illegally.

Chinese authorities later claimed the first explosion had been triggered when the summer heat caused a highly flammable compound called nitrocellulose to spontaneously ignite. Nearby stores of ammonium nitrate then caught fire and exploded in the major port city, which lies 110km (70 miles) south-east of the capital Beijing.

Firefighters who rushed to the scene reportedly attempted to extinguish the initial blaze with water – only to inadvertently exacerbate the situation because of the presence of hazardous flammable chemicals. The majority of those killed were firefighters, including at least one teenager.

Such was the force of the Tianjin explosions that they registered as small earthquakes.

Then, as now, witnesses filmed apocalyptic, almost surreal footage showing the scale of the inferno.