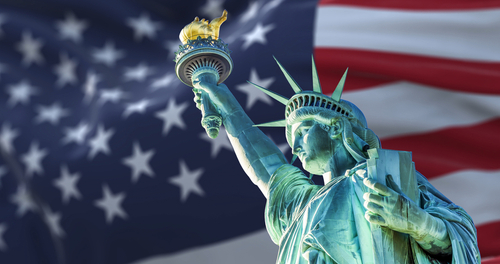 the statue of liberty with the blurry american flag waving in the background. Democracy and freedom concept

The USA, (Brussels Morning Newspaper) One of the difficulties that new democracies face is that if they do not relatively quickly improve the economic conditions in the country, people lose faith in democracy thus making it easier for a new authoritarian regime to get back in power. In other words, democracies need to deliver in order for them to become stronger and more consolidated. The most significant example of a struggling new democracy giving away to authoritarianism is Russia where the economic failures of the 1990s, when Boris Yeltsin was president and Russia was considerably freer and more democratic than it is today, were associated with democracy in the minds of many Russians and thus discredited the idea of democracy. This made it easier for Putin to create the modern authoritarian Russia of today.

This framework does not only apply to newer democracies but is also a helpful way to think about the US during the Biden administration. Joe Biden was elected in 2020 in the wake of four years of democratic rollback during Donald Trump’s presidency. His election was celebrated as a victory or restoration of democracy, but it was never that. Biden’s victory and his presidency do not mean that democracy is back in the US, but rather that the US is moving towards restoring its democracy and holding authoritarianism at bay. Donald Trump lurking in the political background, dominating the GOP, enjoying support from a substantial minority of Americans and preparing to run again in 2024 is a constant reminder that the threat of democratic rollback has not gone away.

For democracy to survive in the US, just as in newer democracies, it needs to deliver. In other words, for Biden to succeed and hold back resurgent Trumpism, the American economy needs to meet the needs of ordinary Americans. This is not lost on the GOP whose tactics during the last eighteen months have been to try to make Biden fail by doing things like promoting vaccine resistance and opposing measures such as Biden’s signature Build Back Better program that would materially improve the lives of millions of Americans.

Unfortunately, for American democracy, the GOP tactics seem to be working and the US economy is caught in a maw of inflation, supply chain problems and, for the moment, a struggling stock market. The GOP has used these economic problems to craft a narrative that downplays the destructive aspects of the Trump presidency, such as his attempt to overturn the 2020 election, his murderous mishandling of the Covid crisis, encouragement of white nationalist forces and efforts to withhold aid from Ukraine unless Volodomyr Zelensky dug up dirt on the Bidens, while suggesting the economy was stronger when Trump was president. This is generally done by falsely reducing Trump’s ample shortcomings as “mean tweets” or just a matter of personal style, while also forgetting the economic chaos that Trump’s Covid policy created.

This GOP narrative is misleading and disingenuous, but it resonates because the economic problems of today are real. It is also true that most of them cannot reasonably be described as being Joe Biden’s fault. For example, supply chain issues and inflation are much more attributable to the Covid pandemic and even the avarice of corporate America than to anything Joe Biden has done or said. Nonetheless, when economic times are not good, the incumbent president and his party are almost always blamed. That notion is deeply ingrained in American political life and Biden is struggling to change that.

If the economy continues to struggle, the Republican prospects will continue to improve, but given the current American political environment where partisan politics are also a struggle between democracy and democratic rollback, any Republican victory, either in winning back control of congress in 2022, or in sending Trump or, if his health fails him, a Trump imitator, to the White House in 2024, will further weaken American democracy, perhaps fatally.

If this dynamic was occurring in another country, the US and its European allies would seek to increase assistance to the democratic government to that it would be able to deliver and solidify support for the regime, but this approach is not applicable in the US. Moreover, given the war in Ukraine, which is disrupting supply chains and increasing inflation, as well as the mood in the US regarding the economy, it is very possible that the economic problems will only get worse between now and the election.

With low popularity and a de facto Republican majority, due to Democratic senator Joe Manchin and Kyrsten Sinema’s efforts to sabotage Biden’s legislative agenda, there is very little Joe Biden can do about this. However, Biden is still the president and must make the case to the American people, not by asserting that all is fine with the economy-that is not true, but reminding them of the danger to the country and democracy represented by Donald Trump and the GOP-and that this goes well beyond a few mean Tweets.