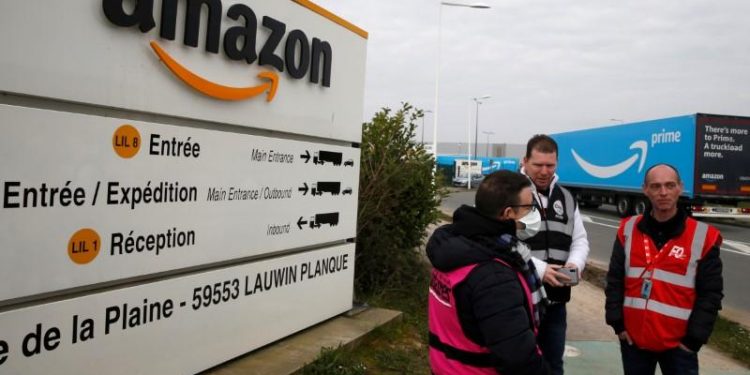 Brussels (Brussels Morning) Online giant Amazon is thriving amid lockdown in France, with the company noting business was up between 40% and 50%, while local businesses are struggling to stay afloat, Reuters reported yesterday, Wednesday.

The second nationwide lockdown in France was put in place at end October and is to last until early December.

Head of Amazon in France Frédéric Duval said the fact that Amazon’s business is flourishing amidst the government-imposed restrictions was in line with Federation of e-commerce and Distance Selling (FEVAD) records.

Noting the approach of the holiday shopping season, he said that “the French need to do their Christmas shopping and they need to make savings.” The second half of November is important for that and Amazon will provide the opportunity, Duval added.

He hoped that small stores, which have not been allowed to open during the lockdown, would be able to re-open as soon as possible.

Owners of small stores have been pleading with the authorities to allow them re-open in time for the end November “Black Friday” weekend, now that the latest data shows new coronavirus infections are starting to decline.

Some politicians, trade unions and NGOs have expressed support for the petition opposing holiday shopping at Amazon, claiming that the online giant is unfairly profiting from the restrictions that are threatening the viability of small businesses, RFI reported Tuesday.

The former Minister of Ecology, Sustainable Development and Energy, Delphine Batho, and the Mayor of Paris, Anne Hidalgo, have warned that major online companies are unfairly benefiting from the crisis caused by the authorities’  responses to the coronavirus pandemic.

The petition warns that thousands of jobs have been lost as result, with unemployment reaching 9% and one million people falling into poverty.

It calls for adoption of regulations aimed at ending unfair competition between online giants and local businesses and points to disproportionate consumption of resources as the cause of the unprecedented situation.

While Amazon previously pointed to the 9,300 jobs it has created in the last decade, the French MP Matthieu Orphelin has asserted that two-to-five jobs have been lost elsewhere in France for every job created by Amazon. He stressed that French businesses account for approximately 5% of those active on Amazon’s French site.