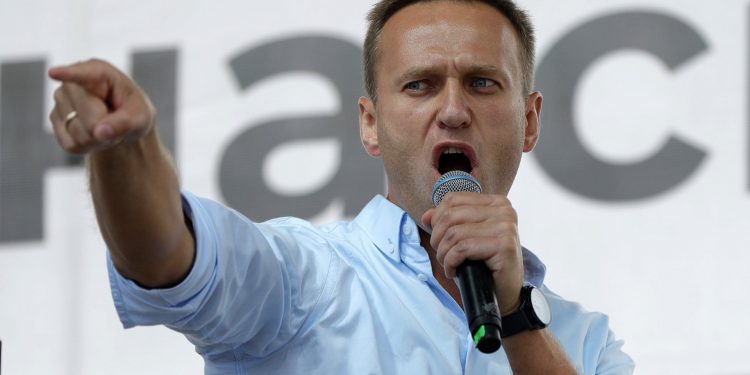 The plane carrying the Russian opposition activist Alexei Navalny has left Moscow for Germany so he can receive treatment for a suspected poisoning that has left him in a coma for 36 hours.

Navalny’s spokeswoman, Kira Yarmysh, tweened that the plane had flown to Berlin. It departed early on Saturday morning, Russian time. She said the “struggle for Alexey’s life and health is just beginning”.

Doctors treating Navalny in the Siberian city of Omsk permitted his discharge after a tense 12-hour standoff with his family and aides, who said Navalny’s life was in danger in Russia.

“The patient is in stable condition … we do not object to his transfer to another hospital, as will be indicated by his relatives,” the deputy chief doctor Anatoly Kalinichenko said on Friday night, reversing an early decision to keep Navalny at the hospital on medical grounds.

Navalny’s wife had appealed directly to Vladimir Putin to allow the evacuation. A medical plane chartered by a German NGO has been waiting at Omsk airport since early Friday morning to take him to Berlin’s Charité hospital.

Yarmysh, said hospital officials had suddenly reversed their position on Friday evening. “It is a pity that it took so long for the doctors to make this decision. The plane has been waiting since this morning, the documents were also ready then.”

In a letter addressed to the Russian president’s administration earlier in the day, Yulia Navalnaya wrote that her husband “needs qualified medical assistance” and asked for permission to transport Navalny to Germany.

Navalny, a fierce critic of Putin, has been in hospital in a coma and on a ventilator since he suddenly fell ill on a flight on Thursday.A Kremlin spokesman had previously said he would provide assistance in evacuating the opposition critic, if asked directly.

A medical plane chartered by a German NGO was waiting at Omsk airport on Friday to take him to Berlin after their doctors had reportedly said Navalny’s condition was such that he’d be able to travel. But Russian doctors said that Navalny would not be discharged from the hospital in Omsk because of the potential risk to his life.

The appeal to Putin followed a day of dramatic developments at Omsk’s emergency hospital No 1, where the head doctor, Alexander Murakhovsky, said Navalny had not been poisoned but had been diagnosed with a metabolic disease caused by low blood sugar.

He said that may have caused the opposition figure’s collapse onboard a flight to Moscow on Thursday, although it would not explain why he has not regained consciousness more than a day later.

Navalny supporters have said they believe the hospital is under pressure to delay his transfer to thwart a proper investigation into what caused his sudden illness, which forced pilots to make an emergency landing as he screamed in agony.

“They have an order: don’t let him go so that it will be impossible for an independent laboratory to confirm poison,” Leonid Volkov, a Navalny ally, wrote.

German doctors who visited Navalny on Friday had approved his transport aboard a specially equipped flight to Berlin’s Charité hospital, Yarmysh said.

Yarmysh called the hospital’s decision not to discharge Navalny – announced just an hour before the German plane arrived – an “attempt on his life”.

Murakhovsky said Navalny was too sick to be moved, despite saying just hours earlier that his condition had improved. “Anything could happen. Even the worst could happen,” he said.

“He’s not in a very good condition and we can’t trust this hospital,” Yulia Navalnaya told journalists at the hospital on Friday morning. “We demand they release him to us so we can treat him in an independent hospital with doctors whom we trust.”

The European court of human rights said it had received a request to grant an interim request allowing Navalny to be transported to Berlin for treatment.

Ivan Zhdanov, the director of Navalny’s Anti-Corruption Foundation, said a police official had told him they had found a “deadly substance”, but refused to divulge which one, citing the investigation.

“This substance presents a risk to the life of not just Alexei, but those around him too,” the police official had said, according to Zhdanov. “Everyone around him should be wearing protective equipment.”

Murakhovsky said traces of chemical substances had been found on Navalny’s clothes and fingers but not his blood, and said they were “normal, industrial chemicals used in plastic cups, for instance”.

If confirmed as a poison attack, it would be the latest in a series of high-profile assaults, often with poison, against opposition figures and Russian dissidents that includes the 2018 poisoning of Sergei Skripal and the 2015 shooting death of the opposition politician Boris Nemtsov.

Navalny was flying from Tomsk in Siberia to Moscow on Thursday when he suddenly fell ill and lost consciousness, prompting the captain to make an emergency landing in Omsk. Mobile video shot on the plane showed medical personnel rushing on board as Navalny screamed.

The German chancellor, Angela Merkel, joined the French president, Emmanuel Macron, in expressing concern over Navalny’s condition and said he could receive treatment in Germany or France. “I hope that he can recover and naturally whether it be in France or in Germany he can receive from us all the help and medical support needed,” Merkel said in a joint news conference with Macron.

The whistleblower Edward Snowden, who is currently in Russia, wrote of the suspected poisoning: “If confirmed, it is a crime against the whole of Russia. There can be no democracy without dissent.”