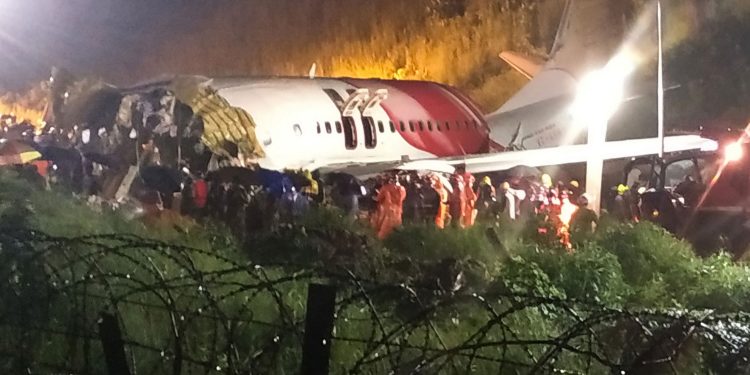 First responders gather around the wreckage of an Air India Express jet, which was carrying more than 190 passengers and crew from Dubai, after it crashed by overshooting the runway at Calicut International Airport in Karipur, Kerala, on August 7, 2020. - At least 14 people died and 15 others were critically injured when a passenger jet skidded off the runway after landing in heavy rain in India, police said on August 7. (Photo by - / AFP) (Photo by -/AFP via Getty Images)

An Air India plane has crashed with 191 passengers on board, killing at least 18 people, including both pilots.

It reportedly skidded off the runway at Calicut International Airport and plunged into a valley.

At least 123 people have been injured, according to local police.

Firefighters and ambulances have rushed to the scene, with paramedics ferrying the injured to local hospitals.

The plane had 10 children on board when it overshot the runway.

Local lawmaker MK Raghavan told the BBC that at least 17 people had died in the crash.

“The @FlyWithIX flight number AXB-1344 on its way from Dubai to Kozhikode with 191 persons on board, overshot the runway in rainy conditions & went down 35 ft. into a slope before breaking up into two pieces.

“We are in touch with local authorities. State police have reported 11 deaths. Relief teams from Air India & AAI are being immediately dispatched from Delhi & Mumbai. All efforts being made to help passengers. A formal enquiry will be conducted by AAIB.”

Captain Deepak Vasant Sathe served in the air force for 22 years before retiring in 2003 and moving into commercial aviation, according to The News Minute.

The aircraft slid off the runway and fell 35ft amid heavy rainfall at around 7pm local time, reports say.

India’s monsoon season, which takes place from June to September, is currently reaching its peak.

Calicut International Airport has a tabletop runway – a type of landing strip with steep banks around it.

The runway is around 2,700m long, the shortest of the four runways in Kerala, according to The Hindu.