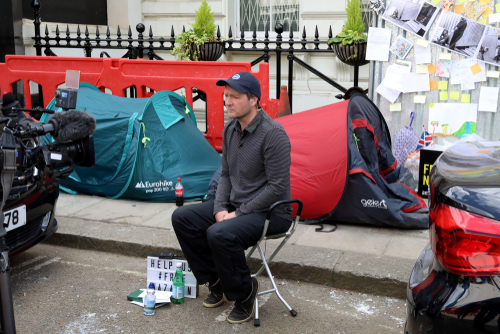 London / UK – June 22, 2019: Richard Ratcliffe (centre) conducts a TV interview in front of the Iranian embassy, London on day 8 of a hunger strike in support of his wife Nazanin Zaghari-Ratcliffe

Brussels (Brussels Morning) British-Iranian aid worker Nazanin Zaghari-Ratcliffe appeared at the Iranian Revolutionary Court on Sunday to face a fresh set of charges having been released from a five-year prison sentence for “plotting to topple the Iranian government,” Reuters reported.

Zaghari-Ratcliffe’s lawyer Hojjat Kermani confirmed that the trial took place and that the final defence had been presented. The final verdict could be passed within a week. “I am very hopeful she will be acquitted,” Kermani said.

The former Thomson Reuters Foundation project manager was arrested in 2016 at the Imam Khomeini Airport in Tehran as she was attempting to leave the country with her 22-month old daughter.

The Iranian prosecutors argued that the journalism training programme for Iranian journalists represented espionage, and that the goal of training the journalists was to spread propaganda against the regime. She was found guilty and sentenced to five years in prison. Iran ignored international calls for her release.

Zaghari-Ratcliffe was released to house arrest in March 2020, as the coronavirus epidemic spread in Iran. Her ankle bracelet was removed this month, following completion of her sentence. However, new charges were raised against her, preventing her from leaving the country.

British Prime Minister Boris Johnson called Iran’s President Hassan Rouhani on Wednesday, insisting she should be allowed to return with her daughter to the UK, where her husband lives. Iranian media emphasised that Rouhani raised the issue of a UK 400-million pound debt for Chieftain tanks that were paid for by the former Shah of Iran, but never delivered.

Zaghari-Ratcliffe’s husband Richard Ratcliffe believes the debt is the main reason Iran is keeping his wife imprisoned, and that her previous and possible future conviction amounts to a form of Iranian “hostage diplomacy”.