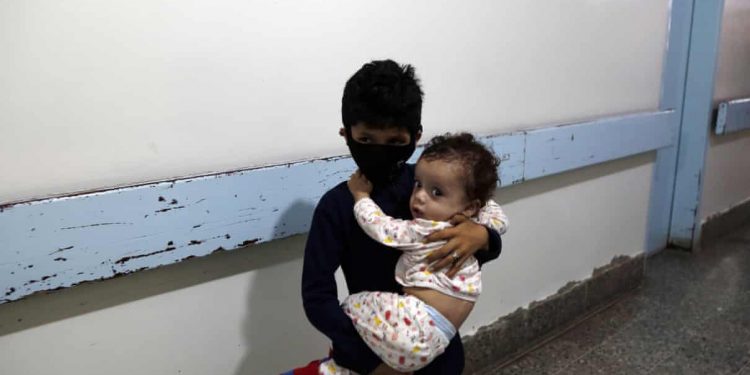 Aid agencies are warning that thousands of people in Yemen could be dying undetected from cholera as people are too frightened to seek treatment in health facilities overwhelmed by coronavirus.

Coronavirus cases in the war-torn country are due to peak in the coming weeks, but Oxfam has warned that health centres are seeing an unexpected drop in cholera cases, ahead of August’s rains when cholera will also increase.

Already experiencing what has been described as the world’s worst humanitarian crisis, with approximately 80% of the population requiring urgent assistance, Yemen is also facing a worsening food crisis.

The country also suffered the worst cholera outbreak in modern times, with 110,000 cases between January and April this year.

A 50% drop in people seeking treatment for cholera in the past three months has led to concern that tens of thousands of people are avoiding health centres for fear of contracting Covid-19.

That concern has been compounded by the fact that, according to estimates by the World Health Organization, half of those diagnosed with cholera in the country will die from the disease if it is left untreated.

Already around 20% of the country’s 333 districts have no medical doctors, with numbers continuing to decline as scores of doctors die from the virus.

The first case of coronavirus reported in the country was in April and although officially only 1,644 cases had been recorded by 22 July, the actual figure is likely to be far higher because of underreporting and a lack of testing facilities.

Muhsin Siddiquey, Oxfam’s Yemen country director, said: “Yemen is on course for a truly horrific catastrophe as both cholera and Covid could peak in the coming weeks. Yemenis desperately need an end to the fighting which has destroyed health facilities and left communities more vulnerable to the virus.

“Rather than show that Yemen has cholera and Covid under control, the low official numbers demonstrate the exact opposite. A lack of working health facilities and people too scared to get treatment mean that the numbers suffering from these diseases are being vastly under recorded.”

Yemen has also been hit by the economic fall out from the coronavirus. A slump in remittances and even tighter restrictions on vital food imports mean there have been huge increases in the price of food and millions of Yemenis are being pushed deeper into a hunger crisis.