A year after the Taliban took power: ‘Now get my mother out of Afghanistan’ 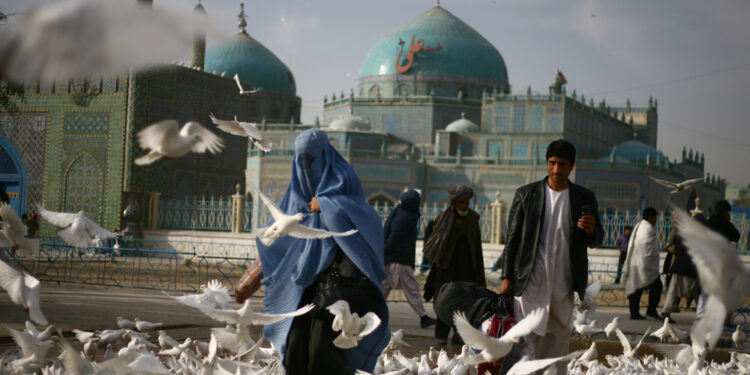 Brussels, (Brussels Morning)- Exactly one year ago, the Taliban started their attack on the provincial towns. A week and a half later, the Afghan government fell. At the time, many Afghan inhabitants of Brussels were very concerned about their relatives left behind. Among them is the Schaerbeek grocer Abdul Moqim Samadi. “My wife is finally in Belgium. Now mother.”

“Hello comrade, ça va?” Abdul has just returned from Schaerbeek town hall and greets a customer in Schaerbeek’s Helmet district. A few words of Dutch alternate with his fluent French. His brother-in-law took over the honours in the store when Abdul took the last administrative steps to become Belgian.

Under his arm, Moqim carries a pile of papers in a transparent folder. He shows the proof of payment that is on top of the pile: 103 euros for a Belgian passport and identity card. “I’m super happy,” it sounds.

The 26-year-old entrepreneur has almost everything done. The store is running well. He has bought a large apartment. His wife is pregnant with their first child. In ten days she is due and he will be a father.

Life is already looking a little brighter than it was a year ago, when local residents started a petition for Abdul. Abdul’s wife, who went to visit a sick relative in Afghanistan, was suddenly confronted by the takeover by the Taliban. She arrived on August 12, and on August 15 the Afghan government fell, says BRUZZ.

Abdul’s attempts to repatriate his wife by the Belgian state failed. “I sent a lot of emails to the Immigration Office, but without results. The almost three thousand signatures did not change that either.”

After dozens of emails to Belgian administrations, Abdul decides to have his wife transferred to Belgium himself. He deposited thousands of euros for his wife’s journey, via Iran and Turkey. “She had a residence permit, but I wasn’t Belgian yet. That made things more difficult,” Abdul says.

Mother and sister stuck in Afghanistan

But now he has Belgian nationality and his wife will soon give birth. However, that good news is overshadowed by concerns for his mother and sister, who are still in Afghanistan. “They have nowhere to go. There are no male relatives around anymore: my brother is in Turkey, my father has died. There are sanctions on only shopping or going outside.”

Now that Abdul is Belgian, he is going to make a new attempt to get his mother and sister to Belgium.

Furthermore, Abdul found his underage brother in Turkey after a search. “He was arrested and was in jail,” Abdul says. “With the help of a lawyer and a lot of extra costs, I was able to get him out. He now lives in a small apartment in Turkey, which I rent for him for almost nine months.”

Abdul has contacted the Belgian embassy in Istanbul, but has not yet received an answer. His brother tries to leave the apartment as little as possible. On the street he runs the risk of being arrested and deported. “It would be better if he was here. That way he can help me with the shop and study at the same time.”

Abdul left Afghanistan at the age of 14 when the Taliban asked him to work for them. His mother refused, fearing that the Taliban would kill him like their father. After a long journey, Abdul arrived in Belgium at the age of 16, where his application for international protection was approved. Not long after, he started working.

Since 2016, he has been running the shop in Georges Eekhoudlaan in Schaerbeek. In 2019, the branch in the Roman Steenweg in Vilvoorde will be added.