A question of trust: has Dominic Cummings’ explosive evidence undermined confidence in the UK’s government? 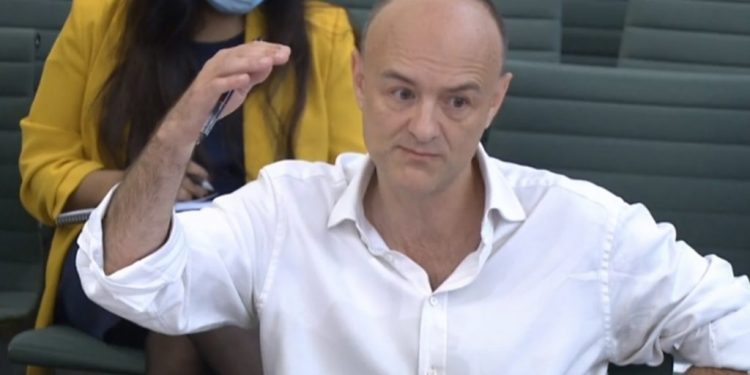 London (Brussels Morning) I had an eye test recently and was told that my lens prescription had become more complicated. In short, although my new glasses can accommodate the disparity between distance vision and reading close up, contact lens technology is currently beyond reconciling this, until the release of the new super dooper (as in super dooper expensive) lens my supplier has coming out, conveniently soon. I live an hour’s drive from the famous eye test destination of Barnard Castle but didn’t feel inclined to travel there to test my opticians’ claims.

Coincidentally, my appointment came only two days after the most famous practitioner of the Barnard Castle eye test had given seven hours of evidence to the Commons Health and Social Care and Science and Technology Committees on the government’s response to the COVID-19 pandemic. It seems with the benefit of hindsight and his apparently newly-acquired 20/20 vision, Dominic Cummings, former chief adviser to Prime Minister Boris Johnson, would have done things very differently.

But where do his revelations, painting a picture of chaotic indecision and disorganisation leave the issue of public trust in the handling of the pandemic – and the confidence that the right decisions are being taken by largely the same group of people?

Let’s recap the most eye-catching claims that Cummings made to MPs.

He said “many senior people” performed “disastrously below” the required standard. Although he included himself, he singled out Health Secretary Matt Hancock, who he said should’ve been fired for “15-20 things”, not least the failure to ensure people being discharged from hospitals into care homes would all be tested first.

Cummings reported that the Prime Minister initially believed COVID-19 was a “scare story” and likened it to the 2009 swine flu pandemic, generally held to have killed no more people than seasonal influenza.

In a bizarre counterpoint to Johnson’s then US opposite number Donald Trump, who wondered aloud about the efficacy of injecting bleach to eliminate the virus, Cummings stated that his boss even suggested he be injected with COVID-19 on television. The PM would, of course, succumb to the virus soon enough. But his subsequent stay in intensive care probably didn’t reassure anyone but the most hardy conspiracy theorists that the pandemic was a scare story.

Despite this near-fatal experience, Cummings described the notion that Johnson subsequently took the issue seriously as mistaken; Johnson instead claimed he had been “gamed on the numbers” which led to the first lockdown. He also apparently opined that he should’ve been like Larry Vaughn, the mayor of Amity Island in the classic Steven Spielberg film ‘Jaws’. Vaughn keeps the beaches open despite expert opinion about a rampaging great white shark. Johnson’s alleged remark conveniently fails to note that Vaughn was found to be horribly wrong in his desire to keep the economy turning over.

Cummings said that the PM had failed to learn the lessons of the first lockdown: that in delaying the start of the 2nd, it then “had to last longer” meaning the economy was hit even more badly and that it killed “God knows how many thousands of people.”

Cummings also claimed he was “baffled” about why the government was retrospectively denying that the early plan was to achieve herd immunity. Cummings said he eventually “hit the panic button” and pushed for a full lockdown to replace this plan, but he acted too late because he was “frightened”. He went on to say that if he had acted earlier, “lots of people might still be alive.”

The former adviser also said Johnson “never wanted a proper border policy” and that this eroded the safety message, because the British public could see “everyone…coming from infected areas” in other parts of the world.

As for his infamous trip to his native County Durham, he admitted that the whole affair – including the runout from his parents’ house to nearby Barnard Castle – was a “complete disaster”, as it “undermined public confidence” in the lockdown policy.

He also insisted that a public inquiry should happen without delay to avoid people “rewriting memories”, documents “going astray” and because many of the same systems were still in place.

Cummings clearly believes an inquiry is urgently needed to restore public trust. Yet what impact are his apparently incendiary revelations having on the public’s confidence in Johnson and his government?

It’s received wisdom among many political commentators that the examples of Johnson’s dishonesty and his colourful personal life are all “priced in” to the public’s relationship with him, aided and abetted by friendly sections of the press that other politicians wouldn’t enjoy.

But this is potentially different to the rest of the ‘noises off’ which have surrounded him in the public arena for over three decades; these are explicit and exceedingly public allegations by someone formerly close to him that his decision-making – or lack thereof – had led to thousands of unnecessary deaths.

Indeed, research by Opinium following Cummings’ evidence seemed to show a real impact; the study held that the PM’s approval rating dipped by 12 percentage points and saw a small fall in the Conservatives’ lead over the Labour Party.

Regarding some of Cummings’ most serious allegations, a hefty 66% of those questioned said they believed the herd immunity strategy claim and a still-substantial 60% accepted the allegation that Johnson was initially dismissive of coronavirus.

But will this affect trust longterm? Given the complex relationship that the British electorate has with Johnson, trust may not necessarily be the bedrock issue here that some assume. His colourful past and sometimes tangential relationship with facts are often accepted in the aforementioned “pricing in”. Furthermore, as the same Opinium research indicated, only 18% of those surveyed thought Cummings himself was trustworthy, despite a majority accepting some of his more serious claims. The research indicated that ongoing approval of the vaccination campaign may also ultimately work in the government’s favour.

Johnson and his administration are not keen for a public inquiry into the pandemic to happen immediately; the calculation seems to be that if it begins later, this will benefit them in terms of the presumed decline in the pandemic. It’s also far from impossible that an inevitably complex inquiry could last for years. Thus, the electoral impact for the individuals concerned may be moot.

The huge majority given to the Tories by the UK’s anomalous electoral system (a subject I intend to return to in a future column) has made the prospect of an immediate inquiry vanishingly small. The Conservatives gained 48 more seats in 2019 than they had in 2017 on an increase in their vote of only 1.3%. The resulting commanding majority scuppered talk of a previously much-vaunted Brexit inquiry. The same maths are likely to prevent a pandemic one at an inconvenient time for the UK government.

So ultimately, has public trust in Johnson been further and fatally compromised by the testimony of an apparently untrusted former aide? The answer would appear to be, not by enough – at least for now.

Cummings’ admitted lack of foresight – but apparently perfect hindsight -has been greeted with the same reaction as the story about his eyesight: as untrustworthy.