2,500 people at ‘Europe for Peace and Solidarity’ demonstration 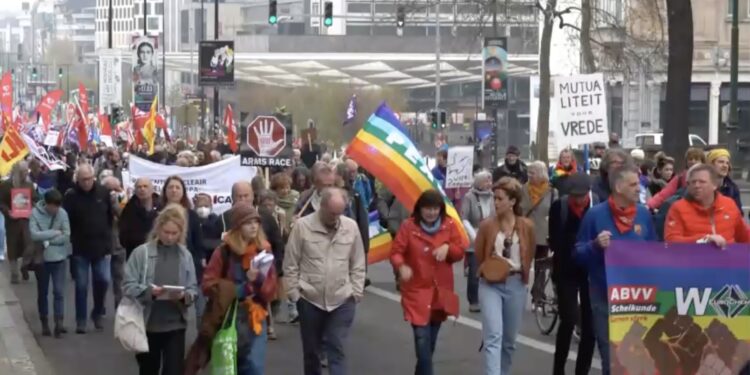 BRUSSELS (Brussels Morning) – Sunday, more than 2,500 people took to the streets to express their outrage at the Russian invasion of Ukraine. The national peace demonstration called for a ceasefire and de-escalation of the conflict. There were protests against further militarisation and nuclear weapons and for more diplomacy.

Around 1 pm the demonstrators gathered on the Koning Albert II-laan. After a few speeches with musical intermezzos, the procession then went through the Kruidtuin and Berlaimontlaan towards Albertinaplein.

With the march, the organisers wanted to express their outrage at the Russian invasion of Ukraine. “Speak out against the horror of war. Join us in calling for a ceasefire and de-escalation,” they urged.

They made eight demands. For example, Russia must leave Ukraine and solidarity with the refugees is needed. They also demand “active peace diplomacy” and do not want a military bid.

“This war was avoidable”

“I think Russia has some security concerns that they have simply ignored. We missed an opportunity to achieve constructive diplomacy,” says Ludo De Brabander as spokesperson for Vrede vzw, one of the organisers of the manifestation, alongside, among others, 11.11.11, various trade unions and their departments, Belgian Coalition against Nuclear Weapons, Movement .net, Pax Christi Vlaanderen and Vredesactie.

“You don’t negotiate with your friends, but with your opponents. I think a lot more effort can be made there. Now all the focus is on the military, while the focus should be on how we can get better relations with Russia in the long term.”

“If you have good relations with current adversaries, then you don’t need those weapons. The money is needed for the enormous climate challenges and alternative energy sources.”

Investing in the social

The peace movements and trade unions therefore asked to invest “in the social sector. Measures must be taken as soon as possible to support the most vulnerable people in Belgium and elsewhere in the world.”

In the margins of the NATO summit, the federal government decided to invest an extra EUR 1 billion in defence. That money comes on top of the 10 billion euros that Defence Minister Ludivine Dedonder (PS) already managed to release before the war in Ukraine. The total budget for Defence will thus increase towards 1.54 percent of GDP in 2030. This means that the country will remain below the 2 percent of GDP that NATO requires. Acceptable to the peace movements?

Not a good thing, says De Brabander: “The previous government has already committed 9.2 billion in a program law in 2017 for the purchase of war material, so we are at 20 billion in investments, while the money is better invested in people’s safety: public services, social protection, reception of refugees from war zones. By investing in the military, you get into an arms race.”

There was also criticism of defence policy from a political angle. “I find that incomprehensible. The budget of the NATO countries is 17 times the budget of Russia. Why would a budget 18 times bigger solve anything?” asks PVDA/PTB chairman Raoul Hedebouw.

His party was prominent at the demonstration. “It is important to send a signal against war and for peace,” says PVDA chairman Raoul Hedebouw. “We’re actually going to escalate now, you can feel that full house: military escalation, political escalation. We’re not going to get out that way. That’s why we’re here.”