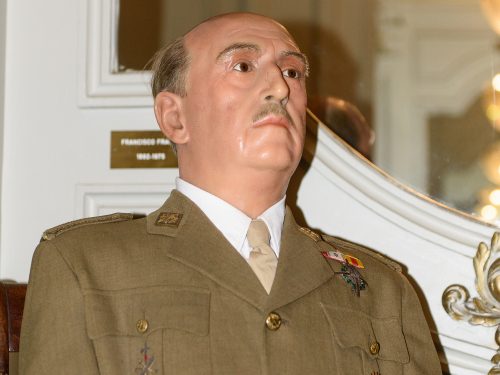 Brussels (Brussels Morning) Spaini’s Socialist-led ruling coalition wants to introduce a law that would outlaw expressions of support for late General Francisco Franco and his dictatorship. The bill would ban organisations praising the Franco era’s leaders and policies, including the high-profile Francisco Franco Foundation, which promotes the nationalist general’s legacy.

Franco rose to power in a coup against the short-lived Spanish republic, winning a brutal civil war in 1939 which saw more than 500,000 Spaniards killed. He ruled Spain as an authoritarian state until his death in 1975, with the tacit support of Western powers that welcomed his opposition to communism in Europe.

The bill, entitled “Law on Democratic Memory”, would introduce a fine of up to 150,000 euro for expressions of support for pro-Franco era figures and ideas, and would also overturn convictions on political, religious and sexual grounds that were handed out during Franco’s regime. It would also strip the nobility of titles conferred by Franco.

Félix Bolaños, Minister of the Democratic Memory of Spain, described the new bill as the first piece of Spanish legislature to expressly condemn and repudiate Franco’s coup and the resulting dictatorship, which he says ushered in “the darkest period” of the country’s modern history.

The bill would also include provisions to establish a national DNA bank with the goal of tracing more than 110,000 unidentified victims of the civil war and the Franco dictatorship period. Unmarked graves from that era are still being dug up. The proposed law would put the government in charge of finding and exhuming the missing victims.

The bill, the latest push in the Socialist party’s initiative to heal divisions over Franco’s role in the nation’s history, is likely to encounter hard opposition from the far-right Vox party and from other right-wing extremists. Two years ago, a Socialist government cleared out Franco’s mausoleum, where many Spaniards came to pay their respect to the late dictator, and moved his remains to a small family crypt away from Madrid.

In a separate initiative, the government has issued a decree to convert the former mausoleum into a civilian cemetery for victims who fell on both sides of the civil war.